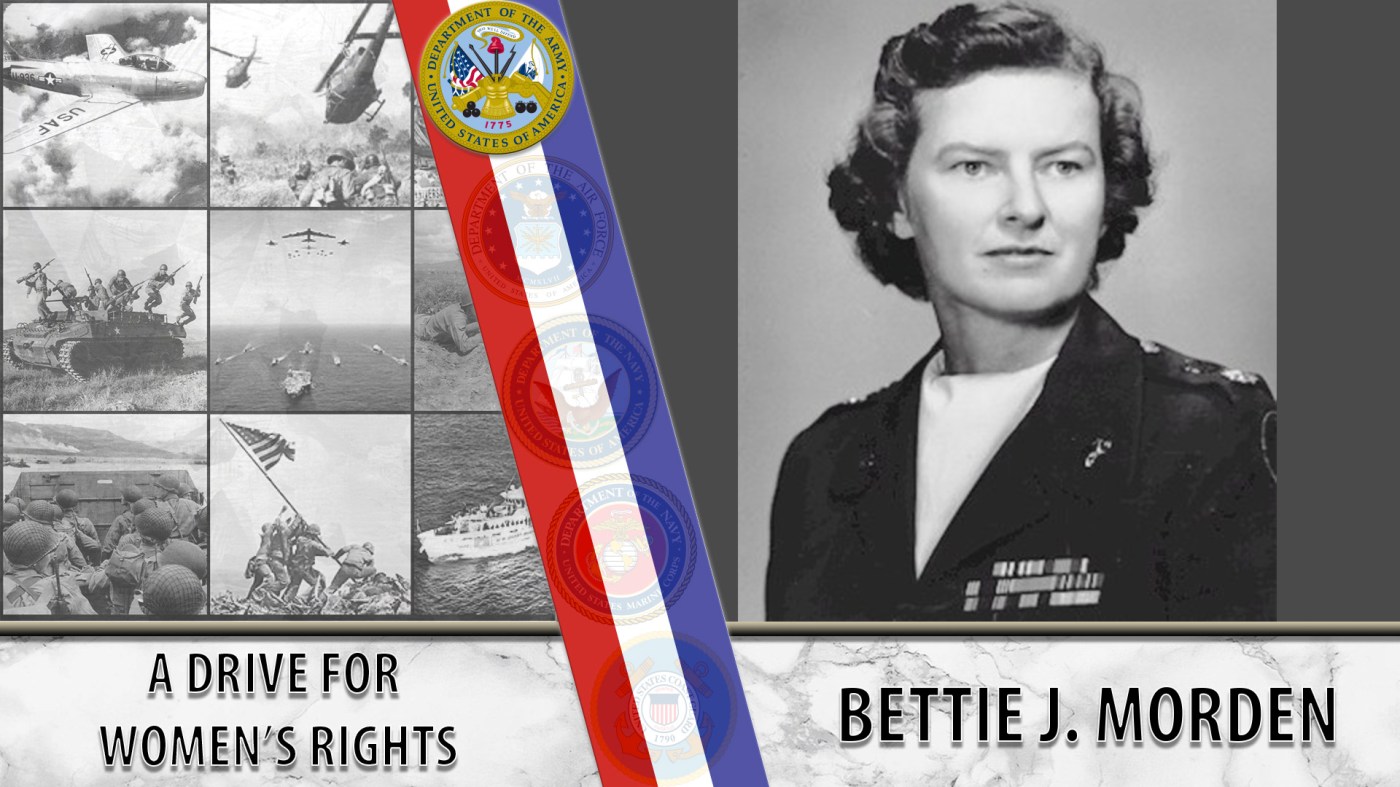 Veteran Bettie J. Morden was an advocate for women’s rights in the military and later became a quintessential historian, sharing her stories on and off the field.

Bettie J. Morden dedicated her life to the U.S. Army in active service and beyond. She was born in August 1921 in Huron, St. Clair County, Michigan. She grew up with her parents, William James Morden and Leah Marie “Bonney” Morden, and five siblings.

In 1939, Morden graduated from high school. The following year, she attended Cleary Business College in Ypsilanti, Michigan. During this time, she also worked as a corporate office secretary.

On Oct. 14, 1942, shortly after her 21st birthday, Morden became one of the first women to enlist in the Women’s Army Auxiliary Corps (WAAC). She completed basic and administrative training at the first WAAC Training Center in Fort Des Moines, Iowa.

During World War II, Morden served at the Third Women’s Army Corps (WAC) Training Center in Fort Oglethorpe, Georgia. As a member of the WAC, Morden was quickly promoted to first sergeant of the Headquarters Company, South Post, at Fort Oglethorpe.

When World War II ended, Morden was discharged from the Army. She began studying at Columbia University, where she earned a bachelor’s degree in 1949 and a Master of English in 1950.

In September 1949, Morden joined the U.S. Army Reserve. She became a second lieutenant in the WAC in 1950. In 1952, she returned to active duty as a first lieutenant. She served for 21 years on active duty and worked as a personnel officer with the National Security and Army Security Agencies. Morden also acted as a personnel staff officer at the Defense Language Institute in Washington, D.C.

Morden commanded WAC detachments at Fort Riley, Kansas, as well as Heidelberg and Pirmasens in Germany. At Fort McClellan, Alabama, she served as the commander of the WAC Training Battalion. In Washington, D.C., Morden was the first executive officer at the Office of the Director WAC. She then served as deputy director to two WAC directors, Brig. Gen. Elizabeth P. Hoisington and Brig. Gen. Mildred I. C. Bailey.

Morden also served during the Korean War and Vietnam War. On Dec. 31, 1972, she retired with the rank of colonel. For her service, she received the Distinguished Service Medal, the Legion of Merit, the Joint Services Commendation Medal and the Army Commendation Medal. She was also a graduate of the WAC Officers’ Advanced Course; Command & General Staff College at Fort Leavenworth, Kansas; and the Army Management School at Fort Belvoir, Virginia.

Two years later, Morden came out of retirement to write the second volume in the Army Historical Series, “The Women’s Army Corps 1945-1978,” which was published by the U.S. Army Center of Military History. Her work detailing the history of the WAC was a significant contribution to military history and highlighted women’s achievements in the military. Morden wrote about WAC directorship and outlined the WAC’s struggle to gain Army and reserve status. Her book also helped give women military credit for WAC service – only after Morden’s book was published were women able to attain a rank of lieutenant colonel or higher.

Morden continued working as an associate staff historian at the Center of Military History until her book was officially published in 1990. In 1991, “The Women’s Army Corps 1945-1978” won the Distinguished Book Award from the Society of Military Historians.

After she retired again, Morden remained an active supporter of women Veterans. For over 30 years, she served as the president of the WAC Museum Foundation. During this time, she campaigned to raise money for the WAC Museum building at Fort McClellan.

When the WAC Museum at Fort McClellan closed, Morden successfully relocated the museum to Fort Lee, Virginia. The new U.S. Army Women’s Museum opened on May 11, 2011. It occupies 13,000 square feet and honors all women soldiers. This space is the only museum in the world dedicated to preserving and sharing the stories and contributions of women in the Army.

Five weeks after the museum’s dedication, Morden resigned as her inoperable breast cancer worsened. Morden passed away on Oct. 12, 2001. She was buried in Arlington National Cemetery with full military honors.