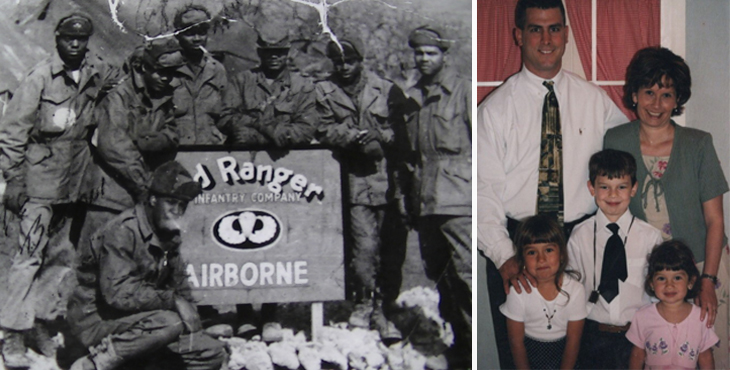 The National Memorial Day Concert on May 30 will showcase Veterans and families that span multiple generations. Here’s a preview of some of those stories.

Army Veteran Cleveland Valrey was five years into his career when he combat jumped into Korea. He served with the 2nd Ranger Company (Airborne). The all-Black unit still existed four years after the services integrated.

Shortly after a battle with Chinese and North Korean Forces May 20, 1951, on Hill 581, Valrey received wounds from enemy action. He recovered in Japan, and continued serving until 1977.

“We were all young and invincible, full of piss and vinegar,” the Texas native said. “Those were just wonderful days, in our youth. We could do anything. To reflect back then, it brings back some pain and some joy. I reflect back and wonder if they’re doing well, the ones I haven’t spoken to in decades. Those were wonderful days, even though we were in conflict.”

He also said he’s thankful for the Memorial Day Concert to highlight his Korean War brothers.

In her early 20s, Michele Kozey-Nolet was an emergency medical technician student. A friend of hers was in the National Guard and set her up with another friend. Reluctant at first because of the friend’s sarcasm, she agreed.

The date got off to an auspicious start. After a day at the hairdresser, her date pulled up in a convertible. They drove from their small town in Connecticut to Boston. Along the way, Michele and Joe Phaneuf formed instant chemistry.

“He was so funny,” Michele said. “He had me laughing the entire time.”

The date – Joe – soon met Michelle’s 2-year-old son and formed an instant bond. Joe and Michele would later marry; the couple had two daughters, and settled down as a family. In the late 1990s, Joe left the National Guard. Sept. 11 changed that decision.

“9/11 hit him very hard,” Michele said. They traveled to New York City in the following weeks, witnessing the tragedy, before Joe rejoined the Guard.

In 2004, Joe deployed with the 118th Medical Battalion to Iraq. He largely worked inside the wire, something Michele said bothered him. Home for a year, he was preoccupied with wanting to make a difference. Soon after, he volunteered as a communications sergeant with the 102nd Infantry Regiment, deploying to Afghanistan. He served as a driver, spending significant time outside the wire. Joe died Dec. 15, 2006, from injuries when an IED detonated near his Humvee.

“The first couple months, it didn’t seem real,” Michele said. “It was just like a fog. We just went about our day-by-day stuff.”

She said when the unit returned from deployment, reality set in. Others came home. Joe would not. Michele and her three kids were now a family of four.

When Michele received the call that the National Memorial Day Concert wanted to profile the family during a salute to Gold Star families, she was speechless.

“I don’t think there’s a big enough word to describe how honored, flattered and amazed we are that they chose us and chose Joe,” Michele said. “We are just beyond honored. He deserves it.”

Michele initially received an outpouring of support, but with time, it diminished.

“People forget,” she said. “Those closest to you always remember. Memorial Day means a lot to them.”

Michele hopes Americans remember Joe and others for a moment.

“With America as divided as it is, I think Memorial Day is so important,” she said. “I don’t want people to spend the whole day sad. Enjoy your family. Enjoy your friends. Just take one minute, maybe two tops, and say a silent thank you. What they did for us, you can’t say thank you enough.”

Michele will appear with the couple’s child, Jordan, during the concert.

The concert will also highlight Vietnam War nurses. More than 265,000 women served during the Vietnam War era. The concert pays special tribute to the sacrifice and heroism of the nurses who served in Vietnam. They saved thousands of lives and comforted the dying in their final moments.

Listen to the Borne the Battle episode featuring Army Veteran Diane Carlson Evans. She discussed her decision to become a nurse, time serving in Vietnam as a combat nurse, decision to re-enlist after working in a civilian hospital and her fight for a women’s memorial on the National Mall.

The concert airs from 8-9:30 p.m. ET, as well as to troops serving around the world on the American Forces Network. The concert will also be streaming on Facebook, YouTube, on the web at www.pbs.org/national-memorial-day-concert, and as Video on Demand, May 30 to June 13.