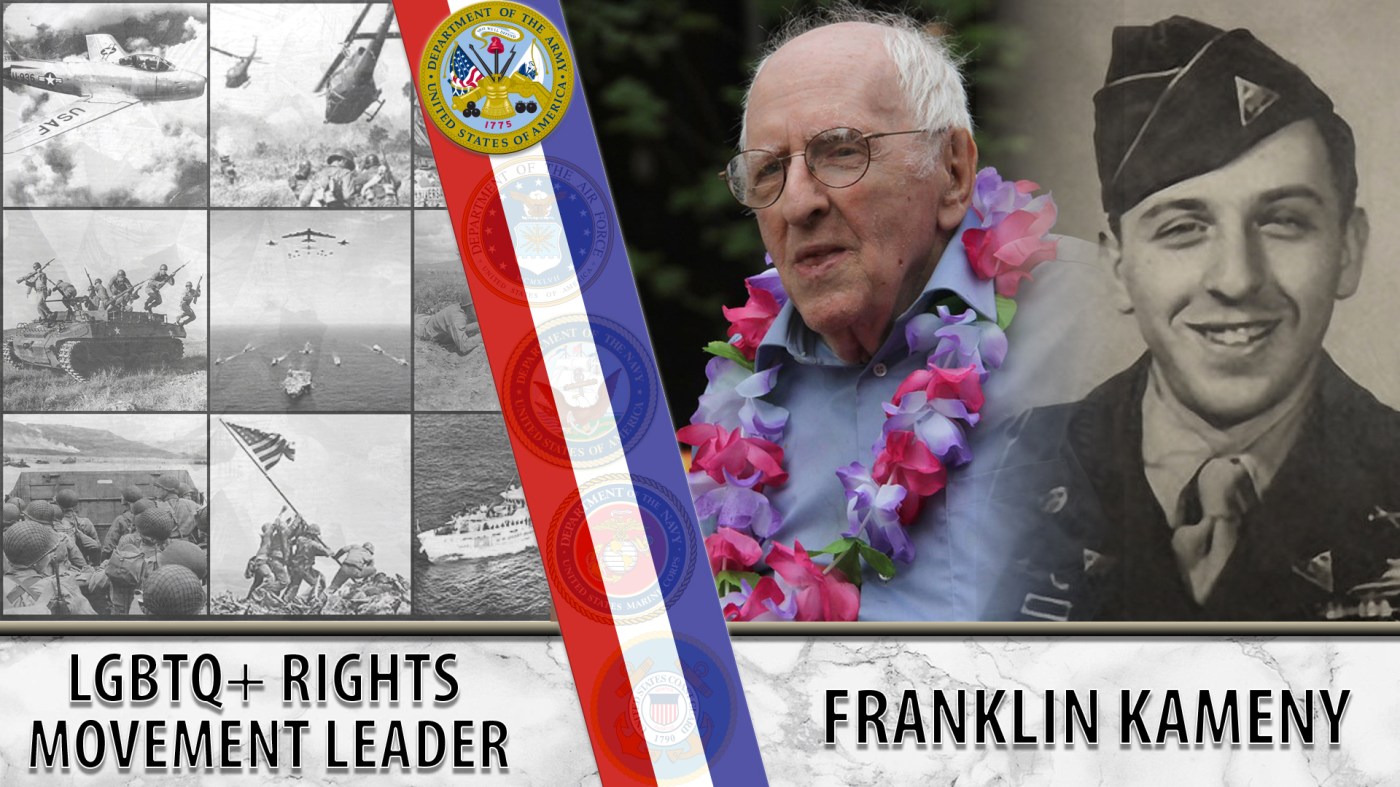 Franklin Kameny served in the Army during World War II. After being fired from his job for his sexuality, he became a prominent LGBTQ+ activist.

Franklin Kameny was studying physics at Queens College, New York, when he decided to enlist in the Army in May 1943. In a 2003 interview for the Library of Congress’ Veterans History Project, he recalled how he was questioned about his sexuality: “I remember very much mentioning to my mother just exactly this, when I came back and told her about signing up, and I said, ‘There was one question in there’…[it] said, “Do you have homosexual tendencies?” That was the way they worded it, and that, to my best of recollection, is a verbatim statement of what the question was. And knowing fully well that I did, I said, ‘No.’ And… that was the end of the issue for the remainder of my Army career.”

Kameny went to basic training at Fort Benning, Georgia, in September 1943. After basic training, he was sent to Camp Polk, Louisiana, and joined the 58th Armored Infantry Battalion, 8th Armored Division as a mortar crewman. His unit took on advanced training at Camp Polk for most of the spring and summer of 1944, before deploying to England in November. In late December 1944, they were sent to eastern France and stationed in the town of Elpy to support Allied forces during the Battle of the Bulge, following the 9th Army’s advance east.

“We were at the northern end of [Roermond, in the Netherlands]…,” he said. “We [were part of] the 9th Army… [and later joined up with] the 1st Army, the 7th Army and the 3rd Army.” Kameny’s unit replaced the British and Canadian forces, who were being directed elsewhere.

By the spring of 1945, Kameny’s unit had reached the Ruhr Valley in western Germany. They were stationed in Duderstadt when Germany surrendered in May 1945. Following this, Kameny’s unit went to western Czechoslovakia. Kameny stated they were not sent back to the U.S. because they expected to be transferred to the Pacific, since the war was still ongoing there.

“Because the war was still going on in the Pacific, and they were shipping people out as fast as they could… we all expected to go,” said Kameny. “We had no imminent expectations of ever – I mean, even assuming we survived everything – of seeing home very soon. And then of course, beginning of August, along came Hiroshima and then Nagasaki, and that changed everything.”

In March 1946, Kameny honorably discharged as a private first class.

After the war, Kameny returned to Queens College and graduated with a bachelor’s degree in physics in 1948. He later attended Harvard University, where he received his master’s and doctoral degrees in astronomy and served as a teaching fellow. In 1957, Kameny moved to Washington, D.C., to accept a teaching position at Georgetown University. The U.S. Army Map Service eventually hired him as an astronomer. But when an employee background investigation raised questions about his sexuality, he was fired due to the military’s policy on sexual orientation.

Kameny fought against his dismissal and became the first person to petition the U.S. Supreme Court with a discrimination claim based on sexual orientation in 1961. Though the court turned down his case, Kameny quickly became involved in the early LGBTQ+ rights movement. He co-founded the Mattachine Society of Washington, a gay rights group, and led the first ever protest for gay rights in front of the White House in 1965. Kameny was especially against the notion that being gay was a psychological disorder. As stated on his page on the Legacy Project, Kameny was fueled by his uncompromising belief that “Gay is Good,” and fought to have homosexuality removed from the American Psychiatric Association’s list of mental disorders. He oversaw its removal in 1973.

Kameny was active in the campaign for LGBTQ+ service members, working with Sgt. Leonard Matlovich in his legal battle over his right to serve openly in the military. In 2009, he received a formal apology for his dismissal from the Army Map Service. Two years later, Kameny witnessed the signing that repealed the “Don’t Ask, Don’t Tell” act, which forbade open LGBTQ+ service in the military.

According to the LGBT Civil Rights Movement website, a dozen of Kameny’s handmade picket signs from his 1960s protests now reside in the Smithsonian Institution’s National Museum of American History.