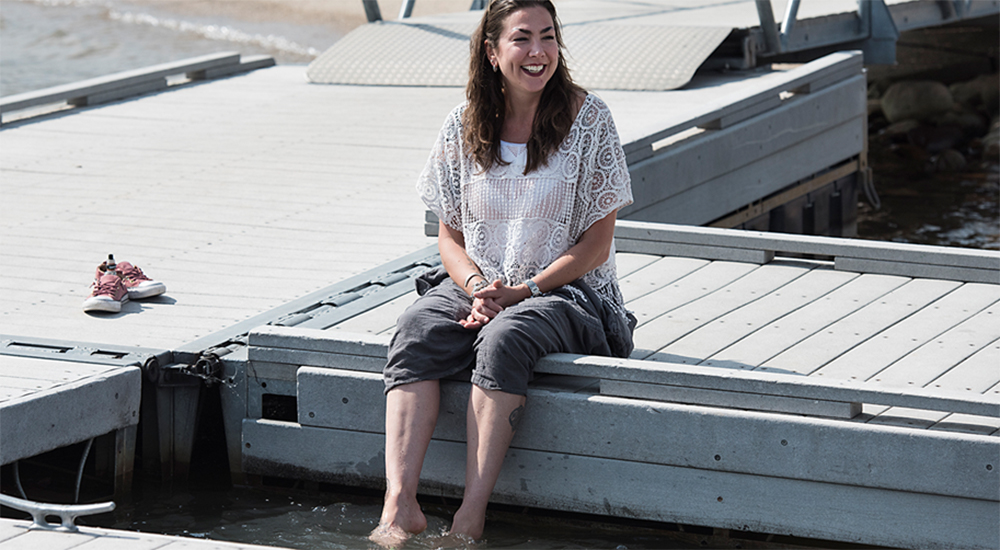 Army Veteran Kristine Bean remembers the noise the most: The constant sounds of rockets, mortars, tracers and nighttime firefighting filling the skies during her deployment at Camp Slayer, a U.S. base near the international airport in Iraq’s capital, Baghdad.

The blasts rang in her head for extended periods. “It was all kinds of bullets flying all night,” she said.

Bean has since been diagnosed with PTSD and depression. She maintains weekly contact with a therapist at VA Salt Lake City. She has taken part in cognitive processing therapy, one of the main trauma-focused psychotherapies VA uses to treat patients with PTSD.

Two years ago, Bean participated in a complementary therapy. She signed up for a study that focused on mindfulness training and sailing for Veterans with PTSD, substance use disorder and other mental health conditions.

Walking, hiking, meditation and yoga can help someone achieve a state of mindfulness. Any other type of sport or recreational activity can, too, if one is focused on the present.

Dr. Marchand’s study on sailing as a recreational therapy included 25 Veterans. Each had had at least one mental health condition or substance use disorder.

Many Veterans with mental conditions and substance use disorders do not experience full remission from conventional treatments or engage in complementary therapies, such as sailing.

Marchand and VA colleagues are testing recreational programs that would encourage participation by offering an enjoyable experience while imparting a therapeutic benefit.

“You focus on the moment you’re in.”

Bean found the mindfulness training, which involved periods of meditation, to be very helpful.

“It seemed like a training of being in the present, recognizing your thoughts wandering, and refocusing them on what you want, instead of what just happened to come to mind,” she said. “It’s more a matter of being able to train yourself to recognize thought patterns that you didn’t want to dwell on and refocus on what you’re doing in the present. You focus on the moment you’re in. We also practiced breathing techniques.”

When asked if she’s applied what she learned through the mindfulness training, Bean says “100% yes.”

“It felt like someone had given me a tool to use when I have anxiety issues, so it’s been good,” she added. “It seemed like the majority of Veterans in the study were enjoying the mindfulness training and the sailing.”

Veteran to interact with horses as a form of therapy

People with PTSD can have a number of distressing and persistent symptoms, including re-experiencing trauma through flashbacks or nightmares, and emotional numbness.

They can also have sleep problems, difficulties in relationships, sudden anger, and drug and alcohol misuse.

Depression is one of the most prevalent mental health conditions found among Veterans and often co-occurs with PTSD.

In the coming weeks, Bean plans to take part in a William Marchand-led study. She’ll focus on equine services, or interaction with horses, as the complementary therapy.

“Dr. Marchand is a great instructor for meditation and mindfulness,” Bean said. “I saw his name and signed up because I think he’s a brilliant doctor. I would recommend his recreational therapies to other Veterans with PTSD.”