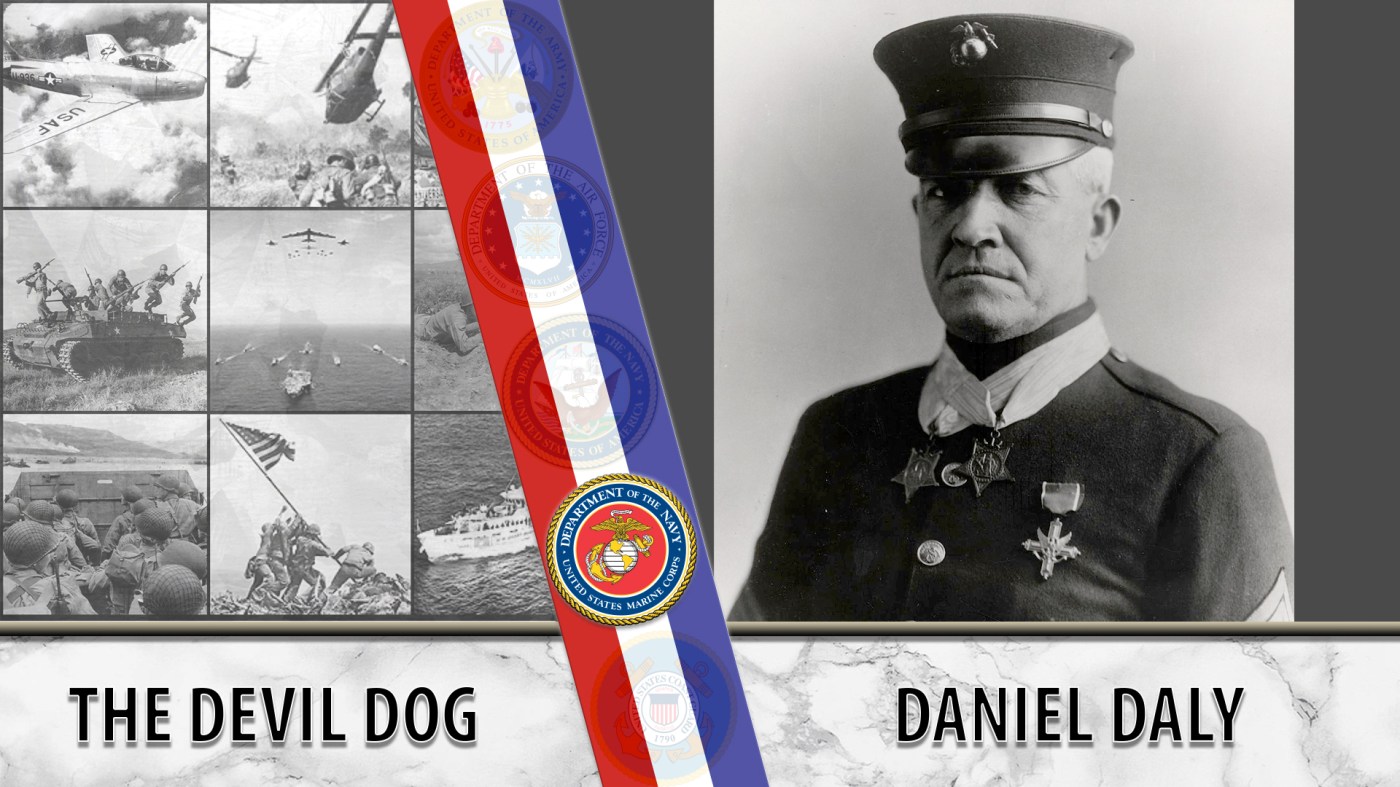 Marine Corps Veteran Daniel Daly served in combat during World War I, and at age 44, nearly earned a third Medal of Honor at the Battle of Belleau Wood.

Many American service members rise above the call of duty, jumping into the fray of the battlefield and risking their lives in selfless acts of heroism and service to their country. Daniel Daly did this during three separate wars. He didn’t care for medals or recognition, but rather, he wished to fight and bleed for the country that birthed him.

Daly was born in 1873 in Glen Cove, New York. He worked as a newsboy on the streets of New York, and later in life, he became a boxer. From early on, Daly was a natural fighter, and his tenacious attitude would serve him well during his military career. Daly’s inspirations were Theodore Roosevelt and his Rough Riders. After hearing stories about the Spanish-American War, he knew he had found his passion. He enlisted in the Marine Corps in January 1899. Much to his disappointment, Daly finished bootcamp after the Spanish-American War ended, but he didn’t have to wait long to see action: the Boxer Rebellion occurred eight months later.

The Boxer Rebellion, also known as the Yihetuan Movement, was a violent insurrection in China that sparked shifts in alliances throughout the world. An alliance was formed between eight nations: the United States, Japan, Britain, Italy, France, Germany, Russia and Austria-Hungry, who sent expeditionary forces to quell the uprising of the Boxers and Qing Empire.

In 1900, Daly served in his first major battle, the Battle of Peking. During the battle, Daly and his fellow Marines scaled the Tartar Wall to reclaim their position. Upon retaking the wall, Daly volunteered to remain on the battlement to defend the position. The Boxers believed they could take back the wall since it was defended by only one man. They were wrong. Daly earned his first Medal of Honor by single-handedly defending his station and inflicting over 200 casualties upon the Boxer Forces. He held his position through the night and into the morning until allied reinforcements arrived to find the enemy dead and a lone Marine standing at attention.

During the Banana Wars, he once again rose to the call of duty. In October 1915, during the Battle of Fort Dipitie, Daly and his group of around 40 Marines were ambushed by approximately 400 enemy combatants. During the encounter, Daly’s group lost their machine guns. In the following hours, during the dead of night, Daly retrieved the machine guns from behind enemy lines in order to provide a means to save his fellow Marines. The following morning, with a better defensive position and a way to counter the enemy, Daly and his comrades quickly defeated the rebels. He was awarded his second Medal of Honor, but he was not finished yet.

Three years later, when the United States entered World War I, Daly was once again on the front lines. In June 1918, during the Battle of Belleau Wood, Daly visited every gun crew of his company to give them words of inspiration, despite being under a violent barrage. One such quote would go down in Marine Corps legend: “Come on you sons of a bitches, do you want to live forever!” Daly, who at 44 years old was ancient in terms of combat years, fought with his Marines to break through German lines. He attacked an enemy machine-gun nest unaided, capturing it with grenades and a pistol. Daly was nominated for a third Medal of Honor, but leadership was hesitant to award one man three Medals of Honor, so they honored his service with the Distinguished Service Cross.

Daly retired in 1929, topping off a 30-year career with the Marine Corps. During his three decades of service, he was awarded two Medals of Honor, the Navy Cross, Distinguished Service Cross, Croix de Guerre and Médaille militaire.