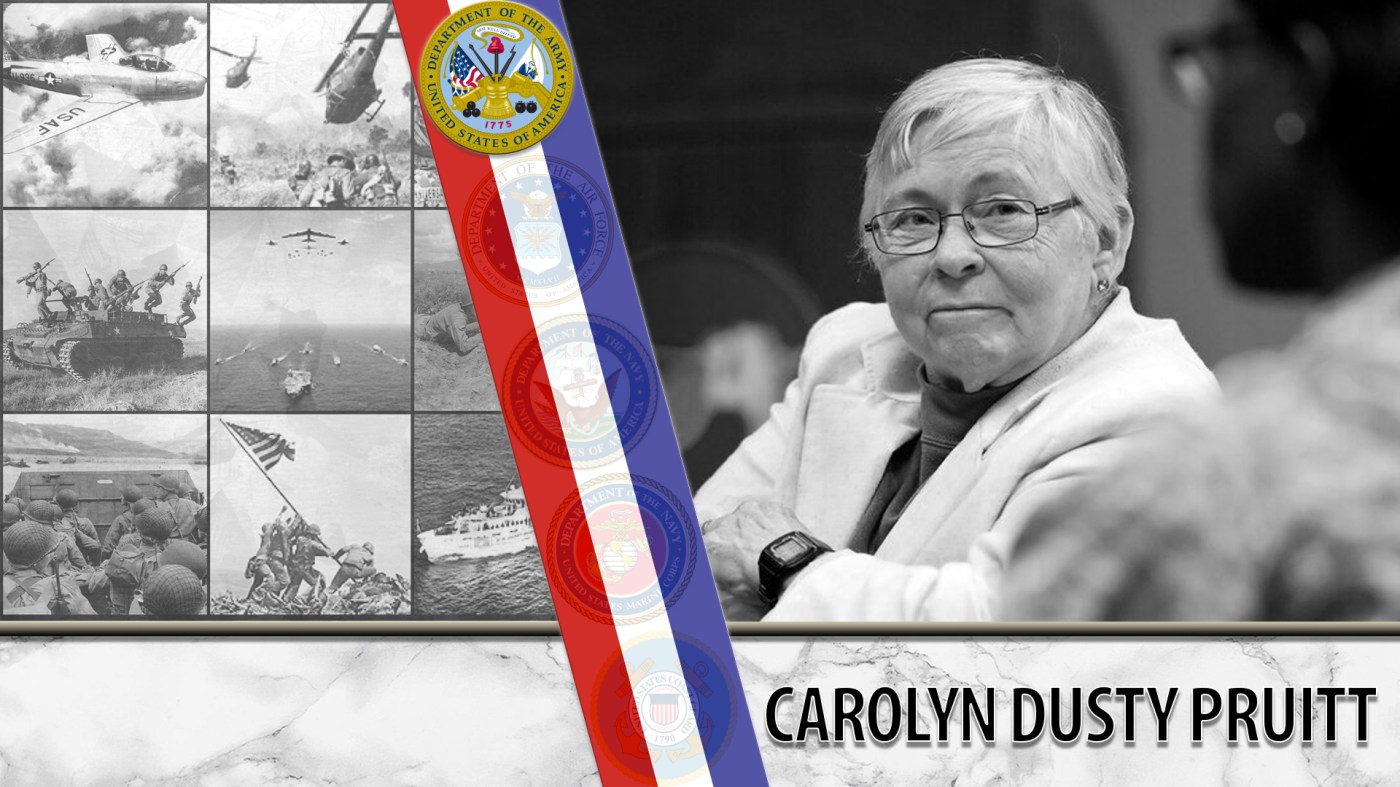 Army Veteran Carolyn Dusty Pruitt served in the Women’s Army Corps and later in the Army Reserve. While in the Reserve, she attended seminary school after feeling called to become a pastor. In 1983, Pruitt gave an interview to the Los Angeles Times about the “Gay, God conflict,” and her commander in the Reserve began an investigation that resulted in Pruitt being discharged.

Born in July 1946 in Ballinger, Texas, Carolyn Dusty Pruitt was the eldest of three sisters. Her father had served during World War II as a bomber crewman and completed over 35 missions in Germany. He owned his own grocery store in Bronte, Texas, where Pruitt spent the first six years of her life. But her father later became a Baptist minister for the Baptist Missionary Association. This resulted in Pruitt moving a lot during her childhood and attending 10 different schools before graduating high school.

In 1965, she earned her Associate of Arts degree from Jacksonville Baptist College in Jacksonville, Texas. She then graduated from Stephen F. Austin University in 1970 with a bachelor’s degree in English and Spanish.

That same year, Pruitt entered the Army through a direct commission as a second lieutenant. “The Army looked like a pretty good place to have a nontraditional career without all the trappings, too much of the trappings of the sexist stuff that was going on at the time in Texas,” she said, in an interview for the Veterans History Project.

When Pruitt joined the military, her father encouraged her to “dig the first foxhole,” meaning “don’t ask somebody to do something you wouldn’t do yourself.” Pruitt has carried this piece of advice with her throughout her life.

Her first job in the Women’s Army Corps (WAC) was training basic trainees at Fort McClellan in Alabama for a year and a half. She was part of the field training committee that taught basic survival skills, including building bivouac shelters and learning chemical, biological and radiological defense.

After meeting Sgt. Sandy McMillan at Fort McLellan in 1971, she was introduced to Metropolitan Community Church (MCC) in Atlanta, Georgia. Sgt. McMillan described it as “a Christian Church with a primary outlet to gay men and lesbians.” After attending one church service, Pruitt “felt that [she] was in the right place and that [she] was home.”

She rotated out of Fort McLellan and served as a recruiter in Dallas, Texas, until WAC was disbanded in 1978. While there, Pruitt joined Agape MCC in Fort Worth, Texas, in 1972 as a charter member.

In 1976, Pruitt transferred from active duty to the Army Reserve and began studying to earn her master’s in theology. She had felt the call to preach from an early age, and at the urging of her fellow church members, she decided to leave active duty and attend seminary school. In 1980, Pruitt became the first openly gay or lesbian person to graduate with a Master of Divinity from Iliff School of Theology in Denver, Colorado.

Pruitt then moved to Long Beach, California, and began pastoring at MCC, where she worked until 1995.

While serving as a chemical, biological, radiological and nuclear defense instructor in the Reserve in 1983, Pruitt gave an interview to the Los Angeles Times. It was published in the article, “Pastor Resolves Gay, God Conflict: Church Works to Heal Homosexuals’ Religious Scars.” Her commander saw the article and began an investigation into Pruitt’s moral character for being gay. This resulted in her promotion to major being taken away and Pruitt being honorably discharged. After discharge, Pruitt took her case to the American Civil Liberties Union, which resulted in a 12-year legal battle. At the conclusion of the case in 1995, Pruitt was reinstated and awarded her promotion to major before she retired from the Army Reserve.

In 1991, Pruitt was named the Advocate Woman of the Year in addition to several other honors and accolades awarded to her by different groups during the 12 years.

After leaving MCC Long Beach, she worked for five years as the MCC Southwest District’s New Works Coordinator, helping to start six new churches in that district. Pruitt then served as a pastor of MCC Family in Christ in Fort Collins, Colorado, until she retired from MCC in 2001.

Currently, Pruitt is retired and lives in Santa Fe, New Mexico. She enjoys birdwatching and camping.