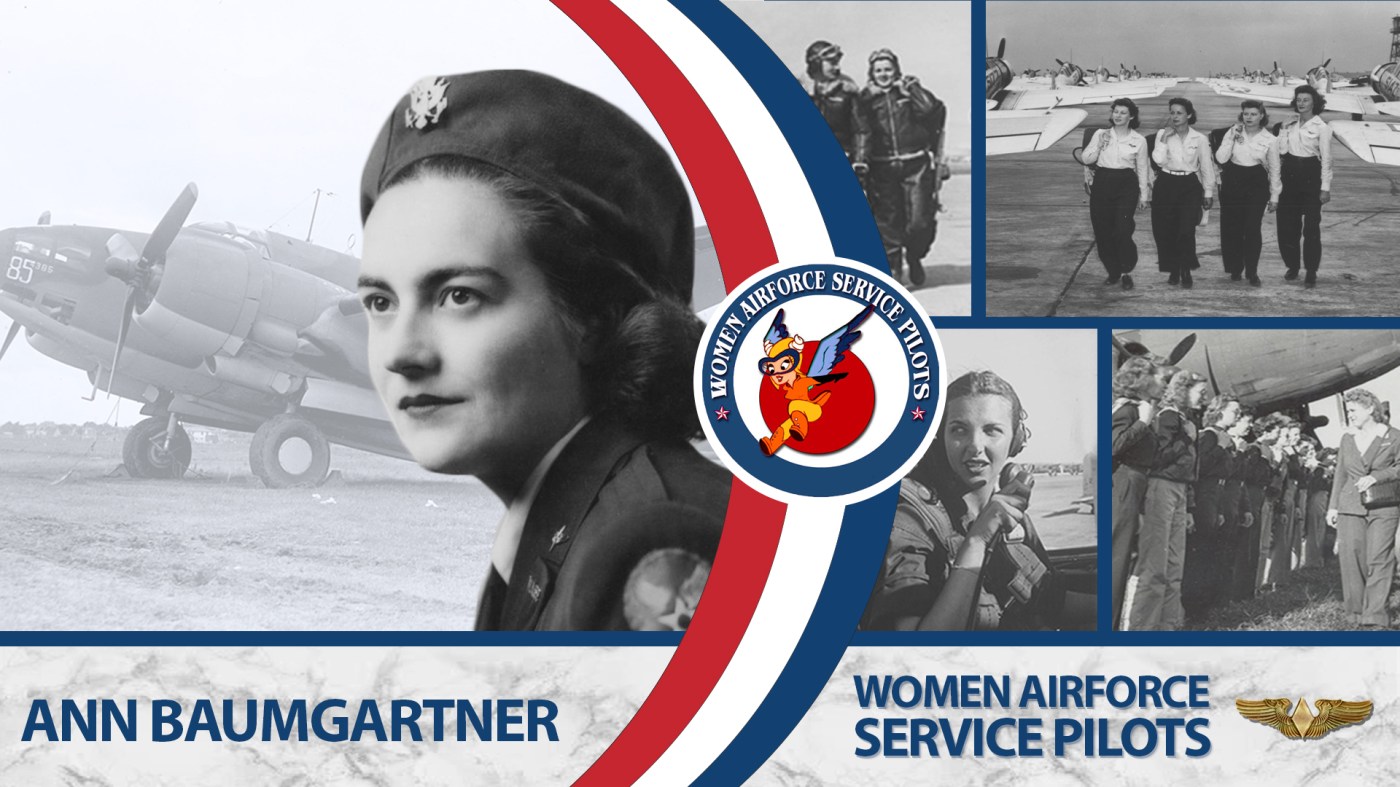 Ann Baumgartner had been connected to the military since her birth at a United States Army hospital. Following her father’s return from World War I, she and her family relocated from Georgia to Plainfield, New Jersey. Growing up, Baumgartner enjoyed watching airplanes in Newark with her father; however, it was not until learning about Amelia Earhart in school that Baumgartner became interested in pursuing aviation.

In 1939, Baumgartner graduated from Smith College as a pre-med student: an indication that she did not shy away from breaking the gender norms of the time. Rather than enrolling in medical school, she chose to work in the public relations department of Eastern Airlines while taking flying lessons at Somerset Hills Airport. This eventually evolved into her becoming a member of the fifth graduating class of the WASP program in 1943.

Upon completing training, Baumgartner received orders for Camp Davis, North Carolina, to work as a tow target pilot. While assigned to Camp Davis, she flew the Douglas A-24, Curtiss A-25, Lockheed B-34, Cessna UC-78 and Stinson L-5. In Feb. 1944, she transferred to Wright Field, Ohio, where she tested aeromedical equipment designed for the WASP program. One month later, she accepted a permanent position as an assistant operations officer in the flight test division. It was here that she became the first American woman to fly the Bell YP-59A jet fighter.

In addition to her test duties, Baumgartner transported staff officers to other Army bases and delivered planes as requested. For a short time, she worked in the bomber flight test division where she gained valuable pilot and copilot experience in the B-17, B-24, B-29, the British de Havilland Mosquito and the German Junkers Ju 88. In Dec. 1944, the WASP program disbanded, and her assignment as a fighter flight test pilot came to an end.

Baumgartner married Maj. William Carl, the designer of the P-82, in 1945. The couple raised two children, Peter and Peggy. While her children attended school, Baumgartner worked as a flight instructor for United Airlines. She eventually moved into journalism and wrote for Newsday, along with other notable media outlets. Later, she sailed around the Atlantic Ocean (twice) with her husband and cruised the Mediterranean, British Isles and French Canals. In her later years, she authored two books: A Wasp Among Eagles and The Small World of Long Distance Sailors.