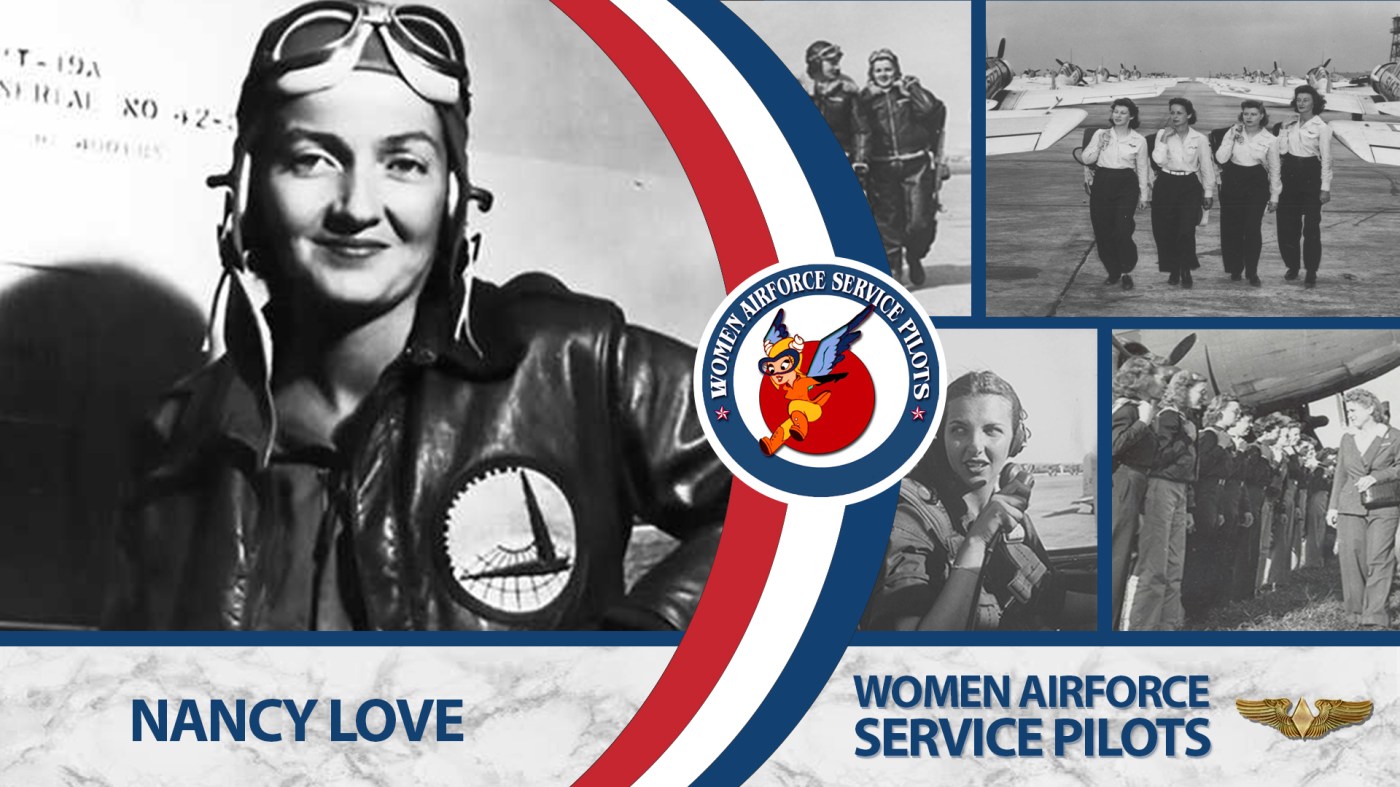 Nancy Love made a name for herself by doing what she loved best: flying. After earning a pilot’s license, she sold airplanes on commission. Love later became a test pilot, participated in air races and secured her place in history as the first female pilot to serve in the United States military.

At the age of 16, Nancy Harkness Love showed early signs of the daring and adventurous spirit that would later emerge as the hallmark of a Fly Girl: a Women Airforce Service Pilot (WASP). When a barnstorming pilot came to town selling airplane rides, Love handed over her pennies and climbed aboard. It was Love at first flight! Afterwards, she devoted all her energy to overcoming her parents’ ambivalence and the depression-era notion that well-bred young ladies did not take flying lessons. Her persistence prevailed, and on Nov. 7, 1930, she received her private pilot’s license.

Love attended Milton Academy in Massachusetts and Vassar in New York. Academics never interested her as much as flying; while in college, she earned money selling rides to students on a plane she rented from a nearby airport. After flying over the university so low that her plane’s belly nearly brushed the treetops, Love received a two-week suspension. Before the end of the year, she earned a limited commercial pilot’s license, garnering her national media attention. It was then that her Vassar classmates started calling her “The Flying Freshman.”

After college, Love became a flight instructor at Inter-City Air Service in Boston. She also chartered flights and sold new airplanes. Among her clients was Joseph P. Kennedy, Sr. Since selling planes in the 1930s proved to be difficult, Love moved to different positions at other companies, becoming an air marking and test piloting at the end of the decade.

By the time the threat of war darkened the doorstep of Europe, there was already debate within the military regarding the use of female pilots. In 1936, Nancy married Robert Love – an Air Corps Reserve Officer. He discussed the possibility of female pilots with Colonel Willan Turner. After Robert successfully convinced Turner, Love then became an operations planner for the Ferrying Command’s northeast sector office. She flew her Fairchild 24 daily between Washington, D.C., and Baltimore.

By the summer of 1942, the Army Air Force Transport Command faced a pilot shortage. Love organized and led the Women’s Auxiliary Ferrying Squadron (WAFS) to deliver airplanes from the assembly lines. The WAFS operated in Oct. 1942, and by Aug. 1943, it had grown to 225 pilots. At this time, their name changed to WASP.

Love continued to advocate for female pilots and became the first woman to fly nearly every Army Air Force Complex’s high-performance combat aircraft, including the P-51 Mustang and P-38 Lightning fighters. She blazed the trail for all the female pilots who would later follow in her footsteps. In 1944, WASP disbanded, and at the end of the war, Love received the Air Medal. When the United States Air Force was formed in 1948, she was given the rank of lieutenant colonel in the United States Air Force Reserve.

Love mothered three daughters while continuing to work as an aviation industry leader. She worked to gain Military Veteran status for WASPs. On Oct. 22, 1976, Love died just three years before the military recognized the WASPs.