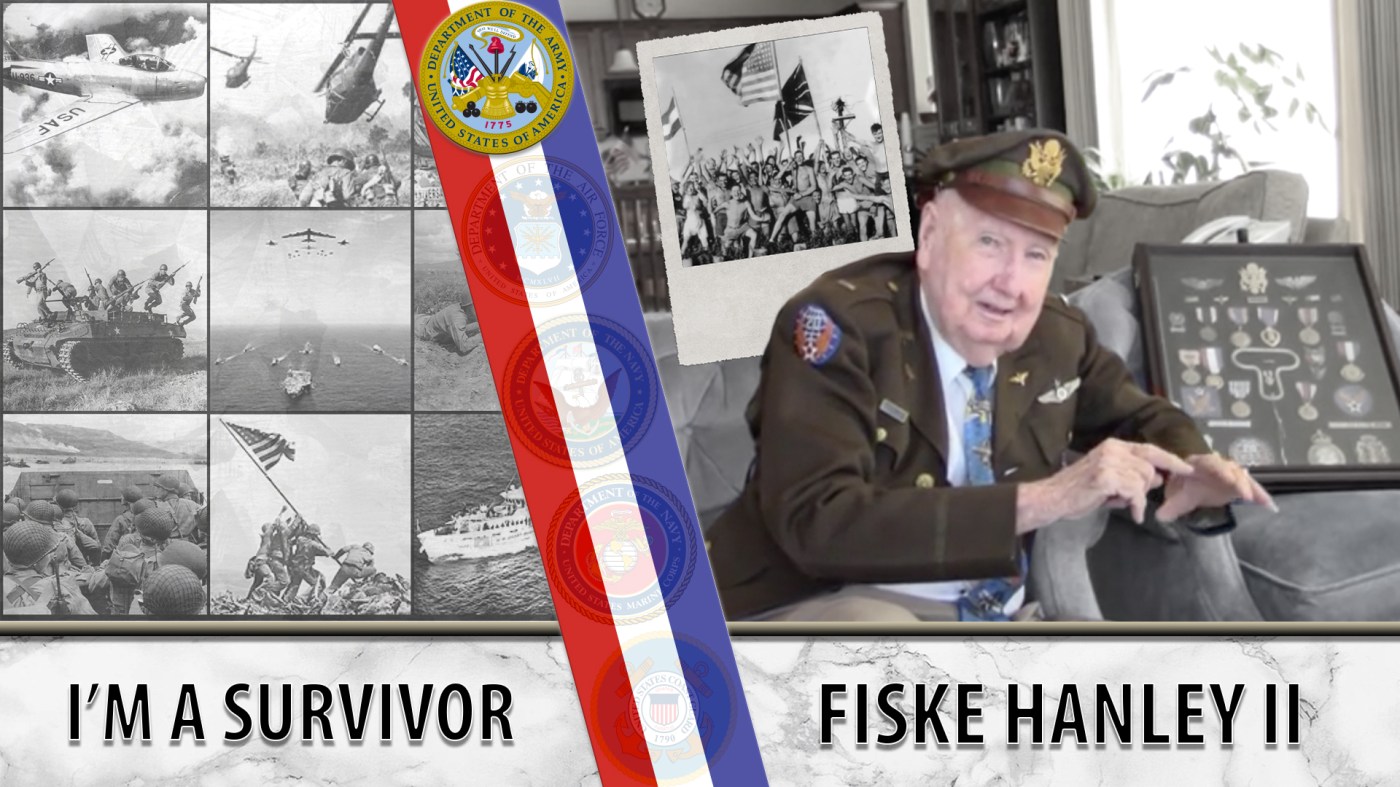 Fiske Hanley II served in the Army Air Forces during WWII. In March 1945, he was shot down and imprisoned until the end of the war.

From a young age, Fiske Hanley II knew he wanted to fly planes. “Probably Lindbergh and people like him inspired me,” he said in a 2020 article from Texas Technical University’s alumni site. “I spent every penny I could on model airplanes.”

After graduating from high school, Hanley obtained his associate’s degree in aeronautical engineering at North Texas Agricultural College and then received a bachelor’s degree from Texas Technical University in aeronautical engineering. Hanley was initially drafted in 1942 but instead chose to volunteer for the Army Air Force’s Aviation Cadet program to finish his degree. After graduating in 1943, he completed basic training at Boca Raton, Florida, and was commissioned as a second lieutenant before starting training as a B-29 flight engineer.

By 1944, Hanley and his crew were assigned to the 504th Bombardment Group and later deployed to Tinian Island in the South Pacific as part of the aerial bombing campaign of Japan.

The crew flew six successful bombing missions at Tinian. But during their seventh mission on March 27, 1945, their B-29 was shot down by the battleship Yamato over the Shimonoseki Strait in southwest Honshu.

“When we were… dropping [mines]… that’s when one of the searchlights from the big battleship caught us,” Hanley remembered. “All the other ships zeroed in. I’ve never seen a B-29 at night that got so illuminated survive.”

Hanley and his co-pilot bailed out of the plane and landed in a nearby rice paddy, in which they were taken prisoner by the Japanese police.

After being taken to Tokyo, Hanley was imprisoned in a dungeon in the Kempeitai’s (secret police) headquarters. He endured cruel treatments by his captors, including beatings, limited food rations and poor sanitary conditions.

“The Bataan Death March people got twice as much food to eat as we did,” Hanley later said. “Anybody badly wounded died. We were not prisoners, not of the regular Japanese Army, but of the Kempei Tai, the Japanese equivalent of Hitler’s Gestapo. Only one out of 29 B-29 crewmen shot down over Japan came back. So I survived.”

When the atomic bombs were dropped on Hiroshima and Nagasaki in August 1945, Hanley and the Kempeitai’s remaining prisoners were transferred to Camp Omori, a regular Japanese prison camp on Tokyo Bay. The men remained in captivity until Aug. 29, 1945, when they were released and taken onto the USS Benevolence. Hanley later returned to the U.S. and received treatment at a hospital in San Antonio, Texas. He was honorably discharged from the Army Air Forces in 1946 as a first lieutenant. For his service, he received multiple medals, including the Purple Heart.

After recovering, Hanley worked as an engineer for General Dynamics and specialized in manufacturing technology. Additionally, he was involved in the design and development of the F-16 Fighting Falcon fighter aircraft and also trained Air Force crews on the B-36 peacemaker bomber.

When he retired in 1989, Hanley struggled with Post Traumatic Stress Disorder (PSTD) and found writing about his experiences therapeutic. He published two books, Accused American War Criminal and The History of the 504th Bomb Group (VH) in World War II. He was also active in the Veteran community by joining the Military Order of the Purple Heart and appearing at local events in Fort Worth, Texas. On his 100th birthday in January 2020, Mayor Betsy Price declared the day as “Fiske Hanley Day.”

In 2015, Hanley and four surviving former prisoners of war (POWs) returned to Japan to meet with Emperor Akihito, who sought to formally apologize to the men for their imprisonment during the war. While there, Hanley visited a village in southern Japan and attended a memorial ceremony in which the locals honored the remains of at least four American soldiers they had kept at their shrine. “The Japanese don’t keep remains, but this little, bitty village did,” Hanley remembered in a March 2020 article from The Washington Examiner. “There were about 100 ordinary Japanese citizens there at the ceremony, and that’s when I forgave the Japanese.”