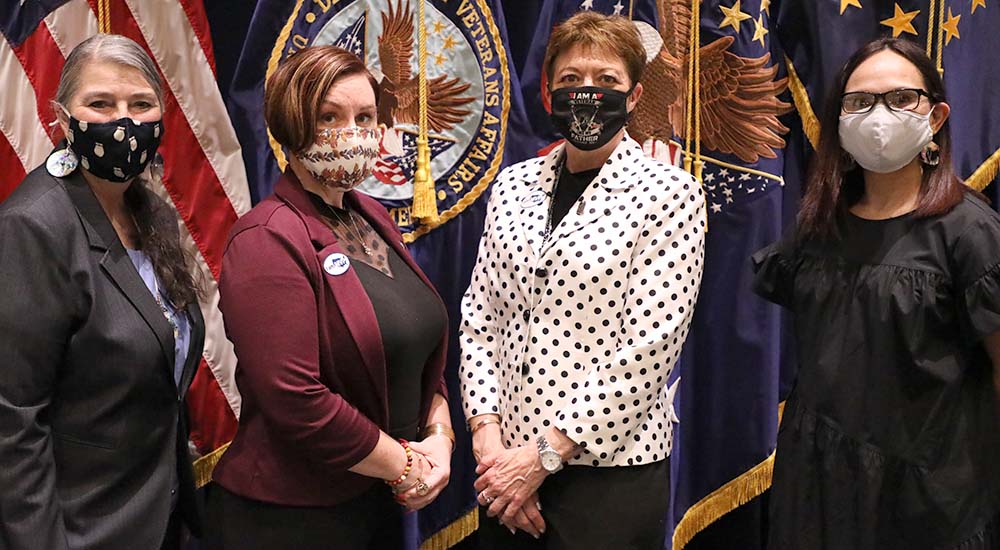 Veteran staff members from the Center for Women Veterans (CWV) joined other VA women leaders in enrolling the Million Veteran Program for research in Washington, D.C., earlier this year.

Army Veteran Kayla Williams had three friends diagnosed with breast cancer in the same year. She wondered if their time in combat had anything to do with their illnesses.

Was there something in the artillery or firearms they used? A toxic chemical in the air they breathed or the water they bathed in?

Williams is now the assistant secretary for VA’s Office of Public and Governmental Affairs. She’s not alone in wrestling with questions like these.

Thanks to VA’s Million Veteran Program, researchers can begin to look for answers.

In May 2011, a national research program was born at VA. It studies how military exposures, genes, and individual lifestyle affect a Veteran’s health. Now a decade later, more than 845,000 Veterans have enrolled in the Million Veteran Program (MVP), making it the world’s largest genetic research program of its kind.

By collecting DNA from as many Veterans a possible, along with information on their health, lifestyle and military experiences, researchers are beginning to answer important questions like:

With Veterans’ data, cutting-edge genetic breakthroughs are published every year. The goal is to one day give Veterans specialized care with targeted treatments and preventions based on their genetics and medical history.

The future of women’s health is in your genes. We need your help.

While there are roughly two million living women Veterans, around 76,000 are MVP enrollees. This makes it hard to guarantee new treatments, screenings and other breakthroughs work just as well in women as for men.

“If I can say anything to women Veterans, it’s participate,” said Estabrooks.

“If you are woman Veteran, or a Veteran of any gender, I would invite you to view this as an extension of your service,” said Dr. Jennifer MacDonald, Army Veteran and senior advisor to the acting Deputy Secretary at VA. She, too, joined MVP and shared her story here.

“I’m very hopeful that the Million Veteran Program offers an opportunity to ensure that women Veterans like me know what else we should be concerned about,” Williams added in her testimonial video. “It’s just a tremendous honor and a heavy obligation to know that I can serve other women by taking part in this.”

How to enroll in VA’s Million Veteran Program

Fifteen minutes and a blood draw are all it takes to make a lasting difference. You do not need to be enrolled in VA health care to sign up. Learn more and enroll today at mvp.va.gov or call 866-441-6075.