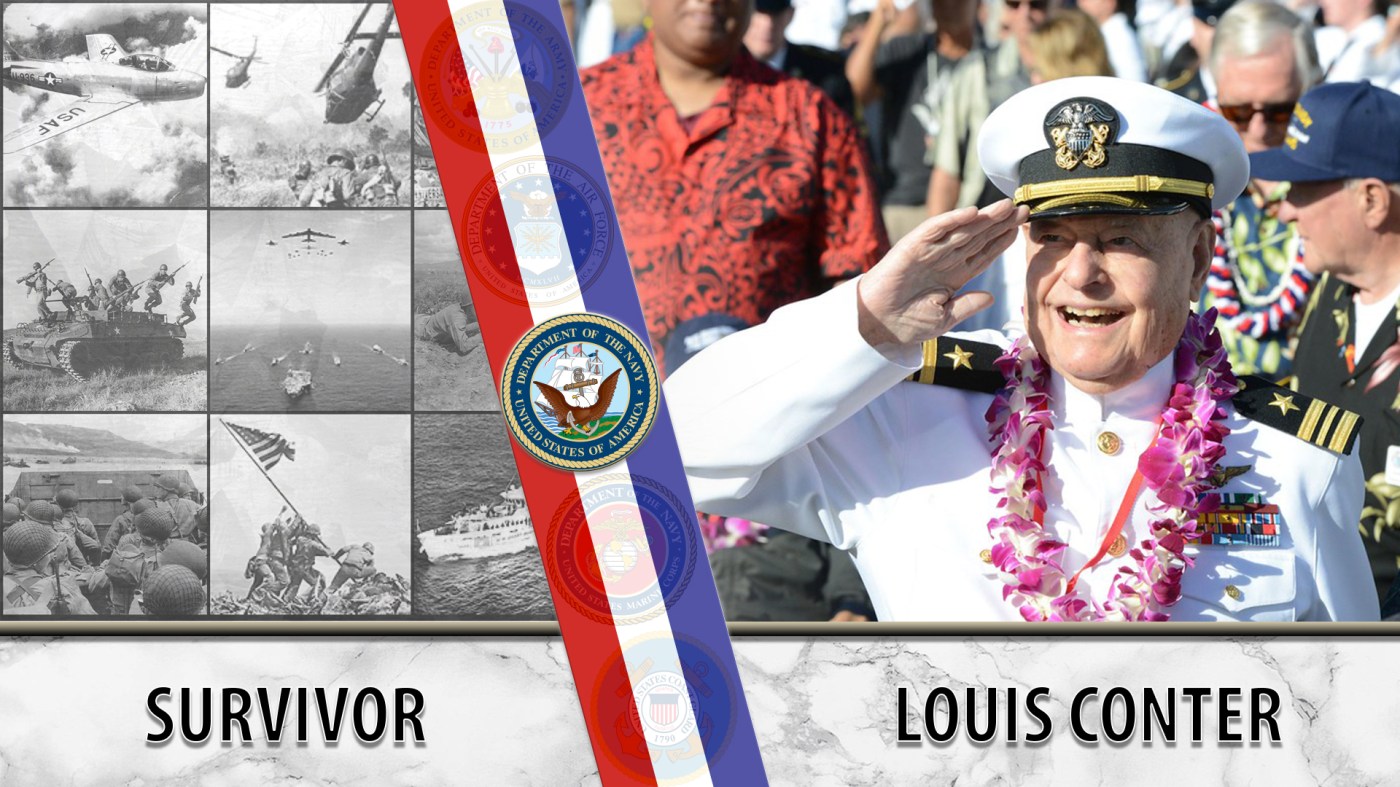 WWII Veteran and Pearl Harbor survivor Louis Conter, who was aboard USS Arizona on Dec. 7, 1941, is one of the last two living Veterans of the ship.

On Dec. 7, 1941, Louis Conter was aboard USS Arizona in Pearl Harbor. Starting his shift as a quartermaster at 7:45 a.m., Conter did not know that the next few minutes would determine the course of World War II.

Within five minutes, Japanese aircraft began dropping the first bombs over him. At exactly 8:09 a.m., a Japanese armor-piercing bomb hit one million pounds of gunpowder, which was stored in the hull of USS Arizona the day before the attack. As the ship burst into flames, Conter scrambled to save as many of his fellow servicemen as possible. Spending around 35 minutes on the ship, Conter, with the help of others, managed to save about 20 sailors while also securing the quarterdeck.

Days after the attack, Conter joined a rescue operation to recover bodies from the ship. After diligently searching, it was apparent that no one remained alive, and the risk of the operation became too high to continue. Although most of the fuel aboard the ship fed the explosion, 500,000 gallons slowly seeped from the wreckage. Nearly 80 years after the attack, the USS Arizona continues to spill up to 9 quarts of oil per day into the harbor. This is often referred to as the “tears of the Arizona.”

Today, parts of USS Arizona are displayed at the Pearl Harbor National Memorial in Honolulu, Hawaii, along with the remains of about 1,000 servicemen.

Following the attack on Pearl Harbor, Conter entered flight school and served as a pilot with Navy Squadron VP-11. This squadron was nicknamed the Black Cats because their PBY Catalinas were painted black for night operations. During his time as a pilot, he was shot down twice. In one of these instances, Conter and his crew swam in the ocean while sharks circled them. His team was also responsible for rescuing over 200 Australian coastwatchers in New Guinea.

Conter went on to serve in the Korean War as an air intelligence officer for Carrier Air Group 102 in Korea, where he was stationed from May through December 1951. Upon returning home, Conter worked in special operations for the National Intelligence Department and helped establish the Navy’s first SERE (Survival, Evasion, Resistance, and Escape) program, serving as the first SERE officer. He opened more SERE schools around the United States and even established one in Germany.

In December 1967, after 28 years of military service, Conter retired from the Navy as a lieutenant commander.

Of the 1,512 officers, sailors and marines assigned to USS Arizona, only 335 survived. Conter and Ken Potts are the last living survivors of the ship.

In September 2020, Conter turned 99 years old, and local law enforcement, firefighters and other community members helped him celebrate with a drive-by salute. Although he could not attend the Pearl Harbor Memorial this year, he said he hopes to celebrate in 2021.

Currently, Conter spends most of his time at home in Eskaton Village, a Grass Valley, California, retirement community, surrounded by friends and family.