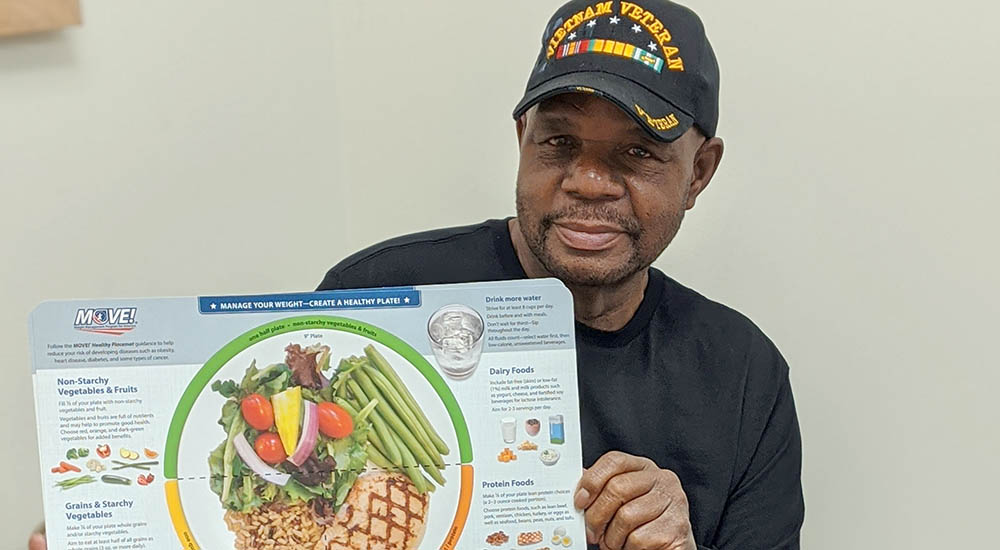 Army Vietnam Veteran Herb Mitchell took his health into his own hands last year and lost 79 pounds. He joined the VA MOVE! program in March 2020 – after repeatedly declining the offer made by his primary care nurse.

Mitchell said he woke up one morning unhappy with how he looked and felt, and he decided to make a change. “Joining MOVE! was the best decision I ever made,” he said. “I feel good about myself now.”

Sarah Richards, Columbus VA MOVE! coordinator, describes the program as an education and support system for sustainable lifestyles. Healthy habits are a key feature of the program.

Mitchell joined a virtual MOVE! group and says members encourage each other. Hearing others’ stories helped them not fall into certain patterns.

Mitchell emphasized how valuable Richards was in the entire process, adding “You’re never discouraged or scolded in the group. Never made to feel bad.”

Since starting, Mitchell completed the program multiple times. His parting thought for Veterans considering MOVE!: “I encourage everyone who has health issues with weight to give MOVE! a chance and put their heart into it.”

She now admits she had the wrong perception. “I had lots of serious medical issues and thought, ‘I don’t want someone telling me when to move or what to eat.’”

Ingram joined a female Veteran MOVE! group in 2020. “They were so open and honest,” she said. “It was helpful to be around like-minded people with goals. It was like sisterhood. I haven’t felt that camaraderie since the Army.”

Before joining MOVE!, Ingram was planning to talk with her primary care provider about a home health aide.

“I was at my health bottom,” she added. “I am having very different conversations with my providers now. I am a participant in my own health now.”

Ingram lost 39 pounds in four months and encourages others facing health issues to take the first step. She now wears an activity tracker and walks over 1,400 steps every day.

“No matter how old or sick you are, you can benefit from it,” she said. “It’s not too late. MOVE! is for every age and every stage.”

“MOVE! is patient-centered and patient-driven. Healthy living isn’t a one-size-fits-all solution,” Richards added. “The program gives you the tools for healthy living and they pick the best tools for them to reach their goals.”