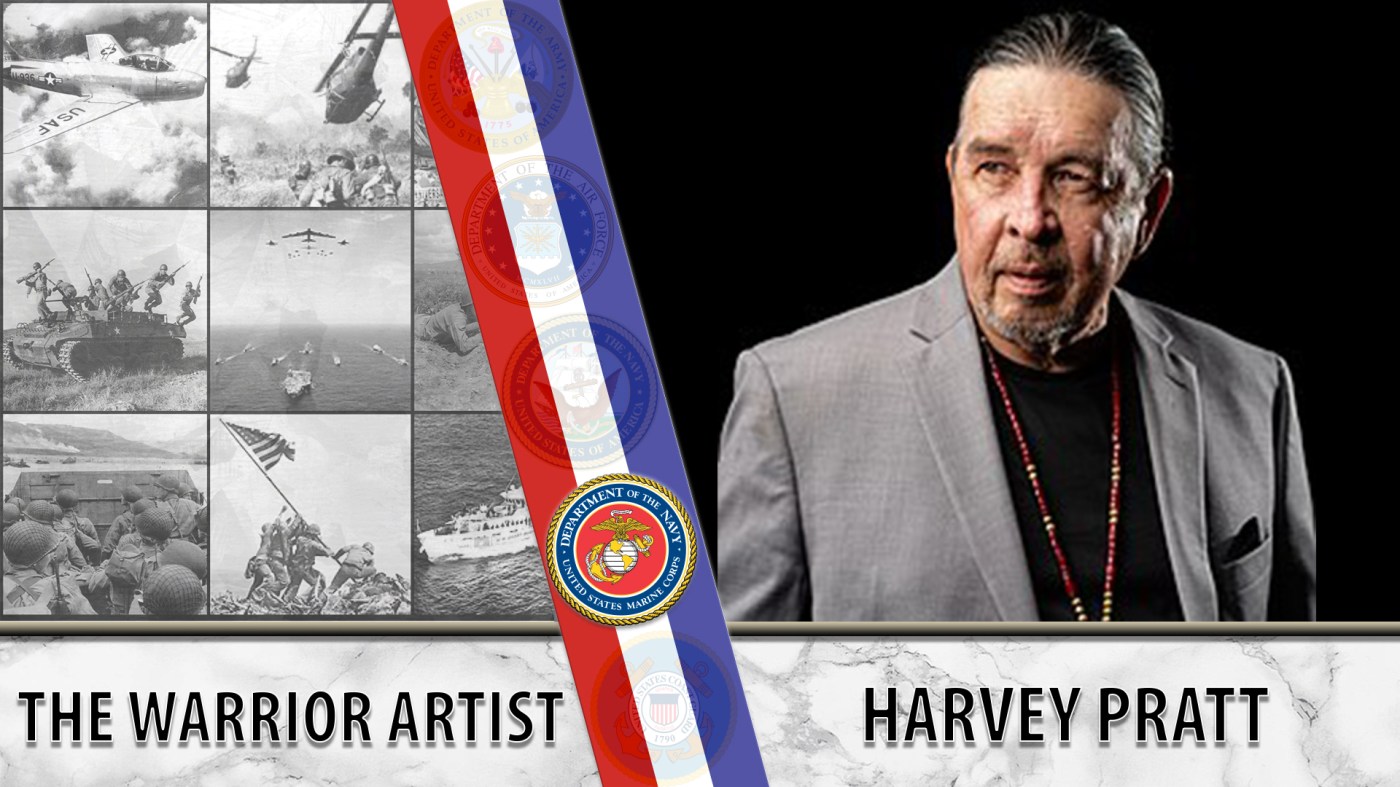 For Harvey Pratt, art and military service have both been part of his family’s history. His older brother Charles was a talented artist, and Pratt wanted to live up to his brother’s skills. As a member of the Cheyenne and Arapaho tribes, warrior culture was also a strong part of his upbringing. Pratt’s uncle served in the Marine Corps during World War II, and while enrolled in college, Pratt decided to continue the family tradition by enlisting in 1962.

Pratt attended basic training in San Diego, California, but was injured during rifle training. Though he was discouraged by his injury, his mood changed when he was given orders. “I opened it up to see what was in there,” he said in an interview for the Library of Congress’ Veterans History Project. “And it said, ‘Private Pratt’s gonna be a good Marine.’ And that’s what really kinda made me suck it up. It’s going to be fine; I’m going to be good; they think I’m going to be a good Marine. And that’s what I wanna be.”

After recovering and finishing rifle training, Pratt was promoted to private first class. He was then sent to Okinawa, Japan, and attended jungle warfare training at Camp Gonsalves. Pratt credited his boarding school experiences and the survival training from his grandfather for helping him adjust to military life. Following training, he was assigned to the 3rd Marine Division and worked as a military police officer. In 1963, he was assigned to Company C of the 3rd Reconnaissance Battalion and sent to Da Nang, Vietnam. His battalion served at the airbase there, specializing in air rescue and air base security.

Pratt served in Vietnam for a year before being sent to South Korea for cold-weather training. After returning to the U.S., he was stationed at the Marine Corps Air Station in Yuma, Arizona. He served as both a supply and payroll clerk before his honorable discharge as a lance corporal in 1965.

Following his discharge, the Cheyenne tribe held a powwow in his honor. “That’s what Indians do. We tell our war stories. We expect our Veterans to tell us what they did to defend our family, our village, our country,” Pratt said in a 2019 page on the Oklahoma State University magazine’s website. “It’s therapy. Indians have been treating PTSD for hundreds of years. We do a ceremony to clean and purify [Veterans] so that they feel better.”

Pratt was unsure about his post-military career until a friend encouraged him to apply to the Midwest City Police Department in his home state of Oklahoma. He originally worked as a detective and patrol officer, but he continued to draw and paint, eventually leading to a career as a forensics artist. He later attended Oklahoma State University to earn an associate degree in police science. After this, the Oklahoma State Bureau of Investigation hired him to develop a special technique for soft tissue reconstruction. Pratt continued his work in forensic artistry and took on cases as a narcotics criminal investigator, taking on many high-profile cases, including the Green River serial killer, the Ted Bundy case, the I-5 killer and the Oklahoma City bombing. He also helped create terrorist identifications from Iraq and Syria, as well as faces from the Weather Underground Organization. He retired from police work in 2017.

In 2018, Pratt was selected to design the National Native American Veterans Memorial, located next to the Smithsonian Museum of the American Indian in Washington, D.C. His design is called “The Warrior’s Circle of Honor” and incorporates many themes in Native American warrior and cultural traditions. “The sacred circle represents heaven, earth and the pathway followed by honor-bound Native People,” Pratt explained in a 2018 article on the Marine Corps website. “Wind spirits can pass through the stainless-steel sacred circle. Water, fire and the drum are the central design elements within the circle. Water represents purity, prayer, cleansing and reflection, flowing over the drum; water softly pulses over circular ridges, suggesting vibrations of voice and drumbeat in a Kasota limestone basin. Fire symbolizes strength, courage, endurance and comfort. The drum is the heartbeat of the memorial and connects all the elements.” The memorial was dedicated on Veterans Day in 2020.

Pratt remains active in the Veterans’ community. He is part of the American Legion and is commander of Cheyenne & Arapaho Post 401 in Clinton, Oklahoma.