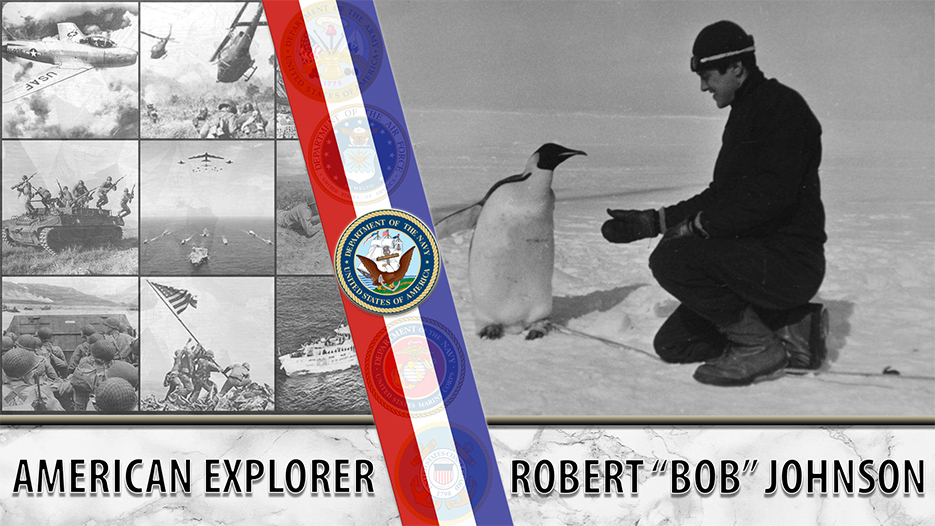 Born in July 1920, Robert Johnson was a member of the Boy Scouts of America during his childhood. At age 15, he became a member of the Sea Scouts in San Diego. As a Sea Scout, he stayed in the quarters of the Star of India ship, which is now the world’s oldest active sailing ship and resides at the Maritime Museum of San Diego. In 1936, at age 16, Johnson sailed on the Pacific Queen, exploring the Cedros Islands for four months. The Sailing Ship Balclutha, formerly known as the Pacific Queen and the Star of Alaska, now resides at the San Francisco Maritime National Park. Johnson’s advanced training in the Sea Scouts prepared him for his future as an explorer.

So long as Johnson earned good grades in high school, his mother would allow him to follow his dream of joining the Navy. His determination paid off, and his mother kept her word. In 1937, Johnson’s mother signed the papers allowing him to enlist into the military at age 17.

Johnson first sailed on the battleship USS Pennsylvania as an apprentice seaman. Instead of going to submarine school, he was ordered to join Admiral Richard Byrd’s third expedition to the South Pole for the United States Antarctic Service Expedition (USASE). Due to his sailing experience, Johnson was transferred to USS Bear. At 19, he was the youngest man on the expedition. They arrived in the Bay of Whales in Antarctica in October 1939. The USASE plans were deserted once World War II started and they evacuated Antarctica in May 1941.

During World War II, Johnson served as an instructor at Pearl Harbor in 1941. While on USS Housatonic (AO-35), he served in the Atlantic Theater and eventually crossed through the Panama Canal to serve in the Pacific Theater. After the Japanese forces surrendered, Johnson returned home to the United States.

In Operation High Jump, Johnson again joined Byrd in exploring Antarctica from 1946 to 1947 as part of Task Force 68 on USS Mount Olympus (AGC-8). Dog sleds were used to gather supplies to build the American Antarctic Base, Little America. Additionally, Johnson completed one of the first parachute jumps in Antarctica. In 1948, he was transferred to Antarctica for the third and last time as chief boatswain’s mate in Operation Windmill. Following his expedition, Johnson was transferred to the occupation of Japan from 1949 to 1952.

After 20 years of a career at sea, Johnson retired in 1956. He worked at the United States Postal Service until 1990. He and his wife, Ruth, were married for 66 years. After she died from cancer, Johnson met his current wife of five years, Mildred, at a cancer survivors’ group. In their home, Mildred decorated a room with memorabilia from his explorations, including his stuffed penguin named Polar Pete.

Johnson Point on Horseshoe Island, Antarctica, is named in honor of him.