Home / Health / Innovation Revolutionaries: Working with the community to save Veteran lives

Innovation Revolutionaries: Working with the community to save Veteran lives 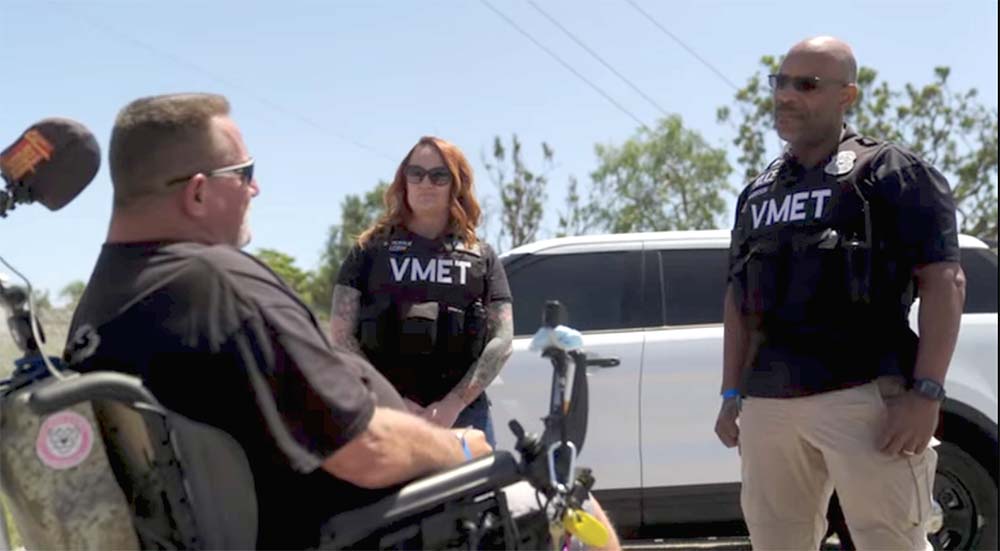 Revolutionary is a regular series from the VHA Innovation Ecosystem, focusing on VA employees who are disrupting the status-quo, breaking down barriers, and attempting to radically revolutionize Veteran care and employee experience. Here are stories about two revolutionaries.

As a homeless outreach social worker at Long Beach VA, Shannon Teague was used to receiving calls from law enforcement regarding Veterans in crisis. At the same time, Tyrone “T-Bone” Anderson was serving as a community police officer when his chief approached him about a Veteran Mental Evaluation Team (VMET) program. Having worked together previously, T-Bone knew Teague was the perfect partner to launch the pilot program with in 2018.

By participating in the VHA Innovation Ecosystem (VHA IE) Shark Tank competition, the pair’s program, including implementation across other sites, has reached 3,000 Veterans and saved more than 250 lives that would have otherwise been lost without intervention.

With the support of VA legal teams and local law enforcement agencies, entities have now established guidelines to guarantee the program provides the same level of care as it begins expanding nationwide.

One of the first Veterans the pair helped had law enforcement called on him 28 times and once pulled a weapon on officers. Fearing the calls may result in the Veteran losing his life and unsure of how to proceed, officers reached out to the VMET team to get him the help he needed at VA. After months of treatment, the Veteran went from homeless to homeowner.

Through success and relapses, he is still in regular contact with Teague and T-Bone. The unique partnership between Long Beach VA and local law enforcement provides an exciting opportunity for the pair, more freedom to guide other programs, identify new areas for change, and advocate for Veterans.

When dealing with Veterans in crisis, Teague and T-Bone know time is of the essence. “In regard to making changes, the guys used to joke, saying I was just one person here and I can’t do that. My response was, ‘I’m going to go to DC to change policies and laws,’ ” said Teague, who is getting close to doing just that.

One policy change already in effect has resulted in expedited authorization of requests for VA police to carry weapons off campus when responding to a call. It now takes only 5-10 minutes for the request to process, compared to the 1-2 hours of processing time prior to the policy change.

The innovator in you

Integrating multiple organizations was no small feat, but it is central to “Reminding employees that they have a voice,” Teague said. Trying something new or experimenting is worth it. For T-Bone, “Helping Veterans, but also finding immense fulfillment in the program and doing the work I love is the best part.”

These two friends have been able to help thousands of Veterans struggling with mental health and are only just getting started. Taking advantage of opportunities and resources within VHA IE opens the door to eventually see an idea go from idea or pilot to national implementation – in the name of improving health care for our Veterans.

Want to join VHA IE’s army of innovation revolutionaries? Visit our website to learn about opportunities for VA employees and external collaborators to become involved in innovation at VA.

By Kalyn Essex is a communications officer at the VHA Innovation Ecosystem. She is an Air Force Veteran who served for twelve years, including one Operation Enduring Freedom tour.