Robert Shumaker: An extended stay at the Hanoi Hilton 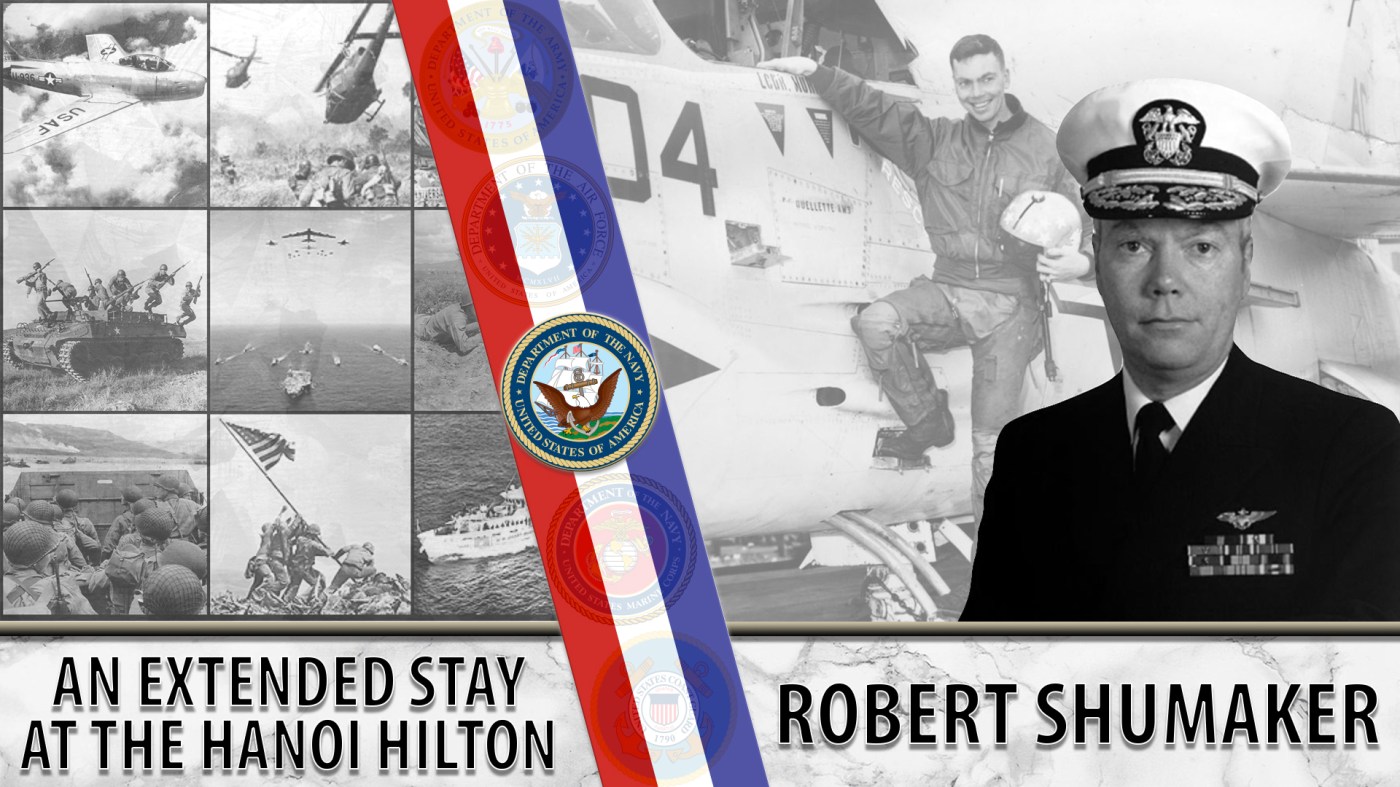 Navy Veteran Robert Shumaker served during the Vietnam War. He was captured by North Vietnamese forces and held as a prisoner of war for eight years.

Prior to his POW experience, Robert Shumaker had other memorable moments in the service. During one mission in the Mediterranean, multiple mechanical malfunctions forced him to freefall 2,000 feet before he could open his parachute. He was also one of the top 32 candidates for NASA’s Apollo program during the Space Race, but a shadow in his lymph nodes found during a physical exam disqualified him.

In 1965, Lt. Commander Shumaker deployed to Vietnam with the Black Sheep Squadron. On Feb. 11, 1965, in response to a North Vietnamese attack on Americans in a hotel, the United States retaliated with bombs from two different carriers. Shumaker was assigned as an escort to those taking photos assessing the damage inflicted by the bombs. North Vietnamese forces, however, spotted Shumaker’s plane and began firing. After making a combat turn, losing his skipper and being hit in the tail by anti-aircraft gunfire, Shumaker ejected from his plane in enemy territory. He hid for an hour but was eventually found and captured. North Vietnamese forces transported him to a convention hall and then to nearby sand dunes, where Shumaker went in front of a shooting squad but was not shot. Two days later, he arrived at what he later nicknamed the “Hanoi Hilton.”

Initially, Shumaker stayed alone in a large room with a hole in the door. After about three months, he spotted another American on his daily trip to empty his refuse bucket. Excited, Shumaker used spilled ink mixed with water on a piece of toilet paper to write, “Welcome to the Hanoi Hilton. If you get this note, scratch your ear on the way out.” He left the note in the waste area. The next time the man emptied his bucket, he scratched his ear, cementing the “Hanoi Hilton” nickname into history.

During Shumaker’s imprisonment, North Vietnamese forces also attempted to use him for propaganda. Since Shumaker broke his back upon landing, he was transported to a hospital. However, upon arriving, the doctor only tapped him with a stethoscope, asked him about his father’s health and smiled for a photo opportunity. Shumaker never received any medical care for his back.

As the prison gained more POWs, Shumaker got three cellmates. He knew the American POWs needed a communication system to be able to talk amongst themselves. They created a 25-letter code with corresponding taps on the concrete walls dividing the cells. This communication system became a lifeline for the POWs. North Vietnamese soldiers eventually placed him and 10 others, including Adm. Denton and future Congressman Sam Johnson, in solitary confinement for three years for being the supposed leaders of the communications system. The men were only moved back with the other POWs after a failed rescue attempt. It was then that Shumaker grew close with future senator John McCain; the two even concocted a scheme to get McCain’s daughter and Shumaker’s son married one day.

During the eight years of his imprisonment, North Vietnamese soldiers tortured Shumaker 12 times. If a POW refused to carry out an instruction, they would be forced to “hold up the wall,” sometimes for six days straight. Other times, POWs would have to kneel with their hands handcuffed behind their back. If a man tried to lean back on his haunches, a guard would hit him with a bayonet. Shumaker once had to endure this for 12 straight days. In an interview for the American Veterans Center, Shumaker named the “Rope Trick” as the worst punishment. During the “Rope Trick,” a handcuffed POW would sit on the floor with his elbows tied together behind his back. A rope attached to his hands reached over his shoulders and to his feet. Guards ensured the POW’s knees remained straight and his feet were flat. An iron bar was also shoved down the POW’s throat to keep him from screaming. Shumaker still has trouble with his vocal cords today because of it.

On Feb. 2, 1973, Shumaker was released during Operation Homecoming. After returning to the U.S., he earned his doctorate in electrical engineering. He also worked as a project manager for Smart Missiles, the superintendent of the Naval Post Graduate School in California and at the Pentagon.

Shumaker retired from the Navy on Feb. 1, 1988, having received the Navy Distinguished Service Medal, two Silver Stars, four Legions of Merit, the Distinguished Flying Cross, a Bronze Star, two Purple Hearts, a Prisoner of War Medal and the Distinguished Graduate Award from the U.S. Naval Academy. He is most proud of the fact that he never gave in to the demands of the North Vietnamese soldiers. As of one year ago, at age 86, Shumaker was still flying planes.