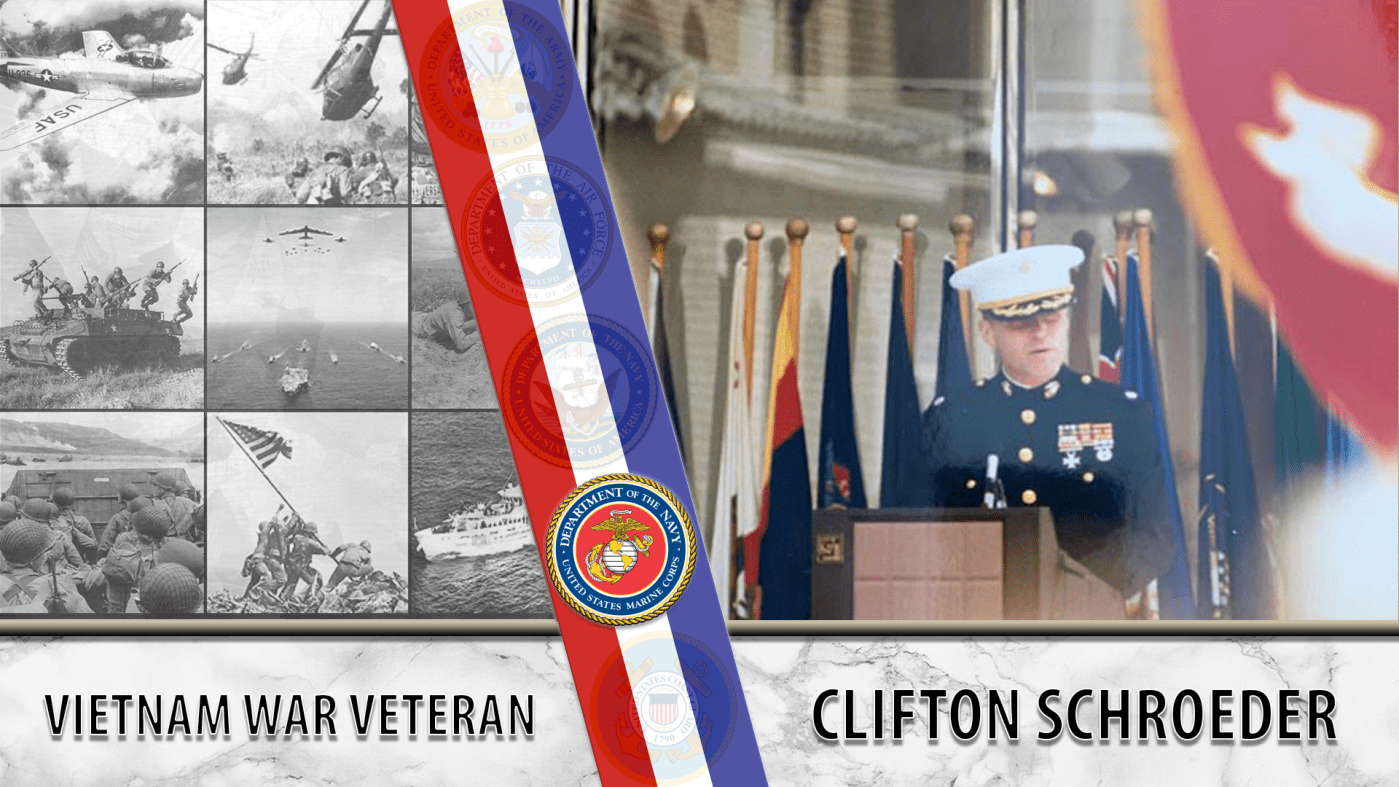 Marine Veteran Clifton Schroeder served as an executive officer in Vietnam and a senior liaison officer during the Balkans Conflict.

Clifton Schroeder grew up on his grandfather’s farm in McGregor, Iowa, and attended Loras College in Dubuque, Iowa.

In August 1968, he enlisted in the United States Marines Corps. He attended Officer Candidate School (OCS) in Quantico, Virginia, and graduated in December 1968. After graduating basic training in Quantico in June 1969, Schroeder learned Vietnamese before being sent overseas to fight in the Vietnam War.

Within a few days of arriving in Vietnam in September 1969, Schroeder saw combat. He served as a platoon commander to India Company, 3rd Battalion, 3rd Marines, joining his platoon just before they went into combat. They walked north from Thon Khe Tri, known as “The Rockpile,” to the Núi Cây Tre ridge in Quảng Trị Province, nicknamed “Mutter’s Ridge.” His first assignment was Operation Idaho Canyon.

Schroeder stated on the America’s Veteran’s Stories podcast with Kim Monson that his first experience in combat was “quite a shock,” and he recalled clinging to dirt as his platoon was attacked by raining mortar fire. “I was very proud of the Marines I was with,” he said. “They were a tough bunch.”

After four years of fighting, his unit was pulled out by President Nixon to return home, and Schroeder was transferred south to join a new unit. There, he became an executive officer at the 26th Marine Regiment.

Following his time with the 26th, Schroeder joined the 1st Reconnaissance Battalion and was responsible for long range combat patrol. Schroeder’s unit ended up in a heavily infested enemy area called “Elephant Valley.” He not only had to worry about the enemy but also the area’s dangerous tigers, as several Marines in Schroeder’s battalion had been killed by them. In addition to tigers, Schroeder dealt with leeches, snakes, rats and bugs.

There were constant engagements and ambushes. Ambushes happened along ridgelines because the Vietnamese used them to their advantage, so troops would find themselves surrounded and trapped. Night ambushes were frequent and the most dangerous threat since the Vietnamese were very familiar with the physical location. “The enemy owned the night,” he said.

Looking back on his service in Vietnam, Schroeder said, “Holy mackerel! I could have been killed in an instant.” He believed that those who served in combat have permanent, clear memories from the frontlines. “I think about it every day,” he added. “I still see the people; it’s very visual.”

Schroeder served 13 months in Vietnam before returning to the U.S. and serving for a year with the Marines in Quantico. He entered the Reserve in 1971 and attended Georgetown Law School. After graduating from Georgetown, he graduated from the Army War College and the Naval War College. Schroeder then taught international law, sometimes teaching internationally in Palermo, Italy, at a school funded by the International Committee of the Red Cross.

In 1993, Schroeder was assigned to a military-to-military combat program, set up to help central and eastern Europeans understand life under a democratic system and ultimately come out of communism.

From 1994 to 1996, during the Balkans Conflict, Col. Schroeder served as a senior liaison officer to the United Nations and European command. His assignment helped the United Nation’s objective to provide stability to the central and eastern European countries that were falling apart due to the aftermath of World War II and the Iron Curtain. Schroeder helped these countries to rebuild from a fallen communist state by teaching them principles of a constitutional democracy.

In the Balkans, he was responsible for monitoring airports to ensure the safe aircraft deliveries of food and other supplies to help those in the conflict. Schroeder traveled with Special Forces throughout Bosnia and Herzegovina, including daily trips through “Sniper Alley.”

Before his retirement in 1996, Schroeder served in various roles overseas, including as a chief of military liaison to Slovenia and as a liaison for the North Atlantic Treaty Organization (NATO) to monitor the Dayton Peace Accords. He also met with the Minister of Defense for Albania after being sent alone as a “contact team” to teach democratic values. He even spoke with the Slovenian government during their 10-day war with Serbia. Schroeder also helped draft the Estonia constitution.