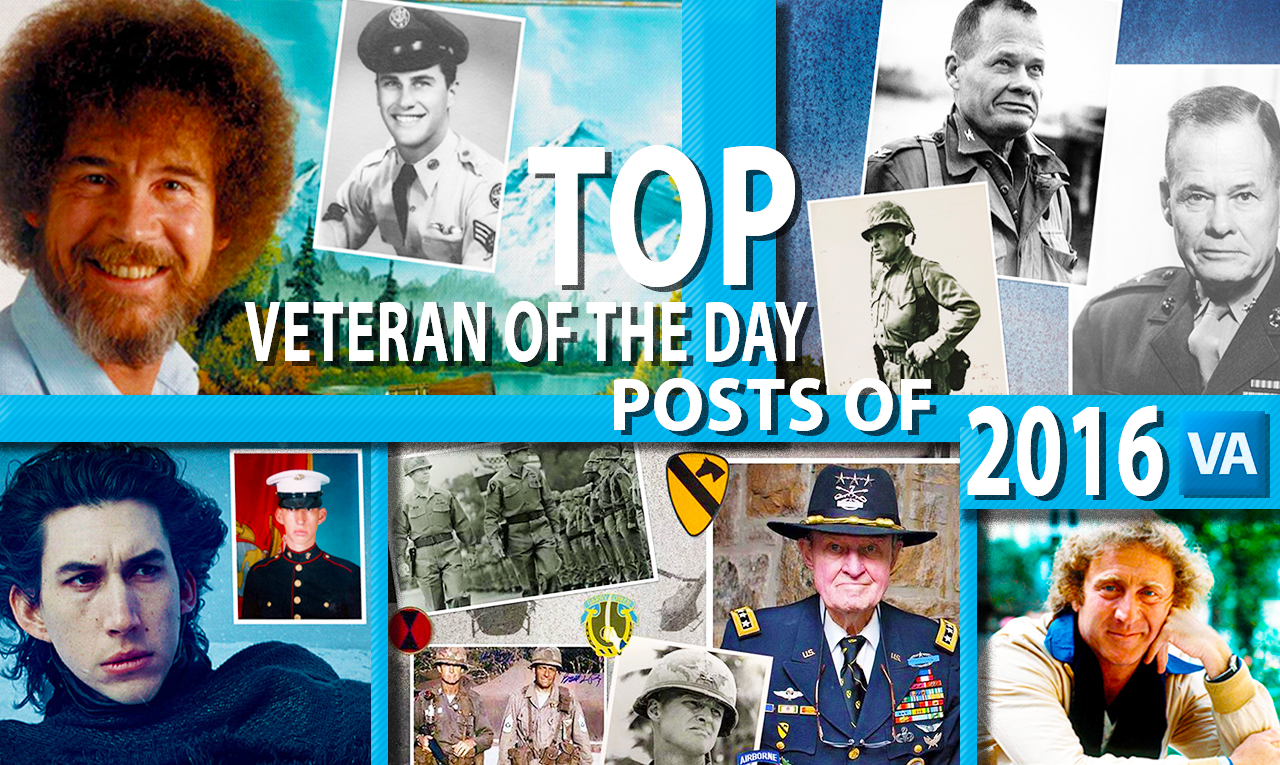 VA honors a Veteran each and every day through our #VeteranOfTheDay feature. Throughout 2016, we shared stories of Veterans from different times and places, branches and backgrounds. Each Veteran inspires us through their courage and sacrifice.

We encourage you to nominate your family, coworkers, neighbors and friends so we can honor their service. Click here to find out how.

Enjoy the seven most popular #VeteranOfTheDay posts of 2016 below.

Hal graduated from West Point – The U.S. Military Academy in 1945 and was assigned to the 187th Glider Infantry Regiment. Three years later he went to the 82nd Airborne Division and was eventually sent to South Korea to command an infantry company in the 7th Infantry Division during the Korean War.

After the war, Hal returned to West Point where he taught then Cadet Norman Schwarzkopf. Several assignments later, Hal commanded the 1st Battalion, 7th Cavalry Regiment, 1st Cavalry Division at the onset of the Vietnam War.

Two months after arriving in Vietnam, Hal led his battalion in the week-long Battle of la Drang, where the enemy had completely encircled his position. His “lead from the front” leadership style directly impacted the unit’s perseverance despite the overwhelming odds.

Hal was ultimately promoted to Lieutenant General and retired in 1977.

Ashley served the United States Marine Corps as a field radio operator from 2007-2015. She also interned with the Prince William County Police Department, using her Masters degree in forensics science and assisting the special victims unit. Ashley left police work for a short stint, but loved it so much she asked to return and work in the field. The Prince William County Police Department welcomed her back with opens arms, noting how compassionate, intelligent, and driven she was and that she was an asset to the community.

On her first shift back in uniform, she was called out to a domestic disturbance that turned into a gun battle. The Marine Veteran was fatally shot and another officer injured.

Ashley’s final resting place will be Saint Thomas the Apostle Cemetery in West Springfield, Massachusetts, where she will be buried on Monday next to her father, Air Force Sgt. David Guindon, an Iraq war Veteran who passed away in 2004.

Adam joined the Marine Corps in 2001, shortly after the attacks on September 11, 2001. He served with weapons platoon of 1st Battalion, 1st Marines, as a mortarman. During his time in the Marine Corps, Adam was involved in a biking accident that resulted in a shattered sternum. While he wanted to serve with his unit in Iraq, and fought to stay in the Corps, he was medically discharged.

Adam then focused his energy on his life-long passion of acting, studying drama at the Julliard School. Adam learned the value of language and self-expression, stating that “it’s just as valuable as any rifle you carry or any tool you can put in your pack.” Adam felt that there was not enough meaningful entertainment being offered to the military. With a goal of bridging the gap between military and the performing arts, he founded the non-profit organization Arts in the Armed Forces, which is dedicated to bringing thought-provoking and contemporary theater to American military personnel currently serving.

Adam applied values of discipline, rigor, and camaraderie that he learned in the military to his acting career, and eventually made his way to the big screen in 2011, debuting in Clint Eastwood’s “J. Edgar.” Since then, Adam has been in several television series and films, including the HBO hit series “Girls,” and the recent “Star Wars: The Force Awakens,” for which he won an MTV Movie Award for Best Villain.

Lewis is the most revered Marine to ever strike fear in the hearts of the enemy. Lewis Burwell Puller, known affectionately by all Marines as “Chesty,” served in the United States Marine Corps in World War I, countless skirmishes in Central and South America, World War II, and Korea. He enlisted as a Private in 1918 and rose to the rank of Lt. Gen. before being medically retired after suffering a stroke in 1955.

Marines the world over recount true and exaggerated tales of Chesty’s heroism, not only in the face of the enemy, but standing up for and taking great care of his Marines as well. His leadership compass was so accurate that after discharging his .45 caliber pistol indoors, a mistake that would normally be a $20 fine for a Marine, Chesty fined himself $100. That kind of leadership has inspired thousands of Marines to lead from the front and set the example for their junior Marines.

Chesty is most famous for his courage in battle. His quotes are used by Marine Drill Instructors and Gunnery Sergeants on a routine basis in order to build confidence and the war fighting spirit in Marines. Quotes like:

“We’re surrounded. That simplifies the problem.”

“They are in front of us, behind us, and we are flanked on both sides by an enemy that outnumbers us 29:1. They can’t get away now.”

And most famously…When an Army captain asked him for the direction of the line of retreat, Chesty radioed his Tank Commander, gave his tanks the Army position, and ordered:

“If they start to pull back from that line, even one foot, I want you to open fire on them.”

Turning to the captain, Chesty bellowed, “Does that answer your question? We’re here to fight!”

Chesty is one of the most decorated Marines in history, but his accolades go far beyond his five Navy Crosses, Army Distinguished Service Cross, Silver Star, two Legions of Merit, Bronze Star, Purple Heart, and three Air Medals. He has a U.S. Navy frigate and the new mobile landing platform named after him, the headquarters building for 2nd Fleet Antiterrorism Security Team is named Puller Hall, Route 33 in Middlesex County, Virginia is named General Puller Highway, he was honored with his own stamp by the United States Postal Service, and the Marine Corps mascot is always named Chesty Pullerton.

Chesty passed away Oct. 11, 1971, but his memory and his legacy lives on in every Marine who has earned the eagle, globe and anchor. The phrase “one more for Chesty!” is one of the most common phrases uttered in the Marine Corps.

Colin served in the U.S. Army from 1958-1993 and is a Veteran of the Vietnam War, Operation Just Cause and Operation Desert Storm. During his second tour in Vietnam he was decorated for his bravery after single-handedly rescuing three Soldiers from a burning helicopter, one of those Soldiers being division commander Maj. Gen. Charles Martin Gettys.

In April 1989, he was promoted to four-star general under President George H.W. Bush where he served as the commanding general for U.S. Army Forces Command. He received his last military assignment later that year when he was selected as the Chairman of the Joint Chiefs of Staff, the highest military position in the Department of Defense.

After his retirement from the military, President George W. Bush appointed him as Secretary of State, the nation’s highest diplomatic position.

Gene Wilder was born Jerome Silberman in Milwaukee, Wisconsin, June 11, 1933. He graduated from Washington High School in Milwaukee in 1951 and received his Bachelor of Arts degree from the University of Iowa in 1955. He spent the next year studying theater at the Bristol Old Vic Theatre School in Bristol, United Kingdom. He was then drafted into the Army on September 10, 1956.

Gene was assigned to the medical corps and trained at Fort Sam Houston. After training, he was assigned to the Department of Psychiatry and Neurology at Valley Forge Army Hospital in Phoenixville, Pennsylvania, where he worked as a paramedic. During those years he began taking acting classes at Herbert Berghof Studio in New York City. He was honorably discharged in 1958. In 1959, at the age of 26 he adopted the name Gene Wilder as his stage name.

Over the next several decades, Gene directed and stared in films, stage plays, commercials, television shows, wrote screenplays, several novels and a memoir. His film career began with a minor role in the 1967 movie Bonnie and Clyde. His first major role was in Mel Brooks’ 1968 film, the Producers. However, he is most known for his work in films such as Blazing Saddles, Young Frankenstein and Willy Wonka & the Chocolate Factory.

At the age of 8, Gene became interested in acting after he discovered he could make his mother, who was struggling with rheumatic heart disease and had recently suffered a heart attack, laugh.

Gene lived in Stamford, Connecticut with his wife until his death on August 28, 2016, at the age of 83, of complications from Alzheimer’s disease.

Bob was born and raised in Florida. He enlisted in the Air Force when he was 18 years old and then stationed at Eielson Air Force Base in Alaska.

In a 1990 interview with the Orlando Sentinel, Bob explained that he was “the guy who makes you scrub the latrine.”

Bob took an art class at the Anchorage U.S.O. club and began painting the Alaskan landscape that influenced many of his pieces on his future TV show.

After 20 years of service, Bob left the Air Force and began hosting the popular series “The Joy of Painting,” where he provided instruction on painting landscapes.