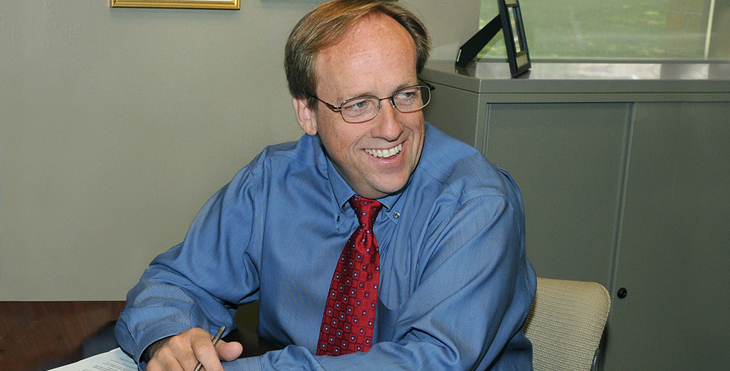 Steve Young, deputy under secretary for Health for Operations and Management at the Veterans Health Administration, is retiring after 41 years of continuous service at the U.S. Department of Veterans Affairs (VA). This two-part story features highlights from his long career, including why he chose to work at VA and which lessons he imparted to others along the way. Read part 2 here.

Going from canteen dishwasher to deputy under secretary of the nation’s largest integrated health care system may not be the typical career path at the U.S. Department of Veterans Affairs (VA), but Steve Young is living proof it’s possible.

After 41 years of continuous service at VA, starting from age 16, Young is retiring his post this month as deputy under secretary for health for Operations and Management at the Veterans Health Administration.

Young attributed the longevity of his career to many factors, but a primary one was seizing new opportunities afforded by VA. “For me, it felt like the right doors opening at the right time and just having the wherewithal to step through those doors whenever they would open,” he said.

The opportunities sprung from his early service at VA. In high school, Young washed dishes for $2.35 an hour at the VA Central Iowa Health Care System in Des Moines and, in college, he worked nights at the Iowa City VA Health Care System as a part-time clerk in the Compensation and Pension Exam clinic.

Before graduating and earning his bachelor’s degree in social work from the University of Iowa, he hit a fork in the road. He’d been offered to apply for the assistant directorship of a suicide crisis line organization just as a position opened up as VA administrative officer of the day (AOD). Young had a decision to make.

“I faced this choice, a life choice, about which pathway I wanted to go down,” he said, “and I chose to go ahead and go down the VA path.”

He took the VA AOD position at the Iowa City VA hospital, where he worked nights taking care of patient admissions, answering phones and coping with facility mishaps like floods.

Beyond the worthwhile mission of caring for Veterans, Young began to recognize that a VA career offered opportunities to advance long term and take on new challenges. Over his career, he’s worked at one-tenth of all VA medical centers across the United States.

Being kind and listening

“He’s really a bright light at VA,” said Shella Stovall, who took over for Young as medical center director at the VA Salt Lake City Health Care System, after his appointment to deputy under secretary in 2016. Salt Lake’s system of clinics stretches across a 125,000 square mile area in Utah, southeastern Idaho and eastern Nevada.

Stovall and Young worked together for seven years, joining leadership at about the same time. “I remember he was always saying at the end of meetings, ‘What have we not thought about?’ He just wanted us to make sure we’d considered everything and the impact our decisions would have on people,” she said. “It’s a real testament that he’s going out on top.”

Even though he’s now in charge of all of Veterans Health Administration (VHA) operations — providing executive leadership and direction for 25 program offices, including the Office of Patient Centered Care and 18 Veterans Integrated Service Networks — Young looked back at his time at Salt Lake as a career highlight.

“The opportunity to be able to help mold an organizational culture that supports Veterans, that supports one another, that does so in a compassionate way … was one of the most fulfilling things I’ve been able to do,” he said.

“I think the thing that stands out most is how kind he is,” Stovall added. She said Young lived and breathed the spirit of the “Kindness Matters” sign hanging in his office. “I purchased a sign like that when he left to remember him,” she said, adding that “he has such a quick wit and his laugh is contagious. I can still hear his laugh coming down the hall.”

(continue to part 2 of this story)