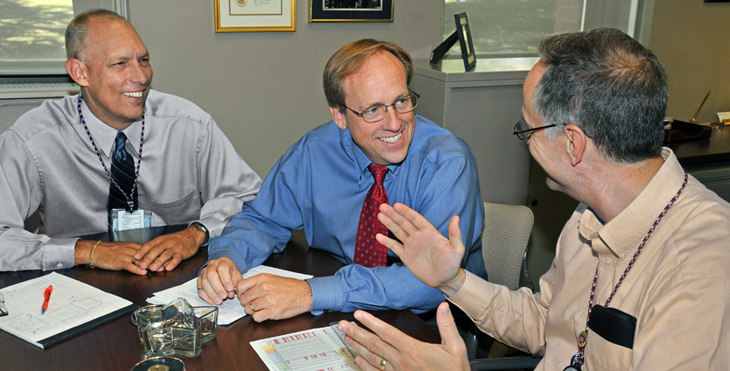 Steve Young, deputy under secretary for Health for Operations and Management at the Veterans Health Administration, is retiring after 41 years of continuous service at the U.S. Department of Veterans Affairs (VA). Below is part 2 of a two-part story featuring highlights from his long career, including why he chose to work at VA and which lessons he imparted to others along the way.

As he pursued his VA career, Young decided he wanted to move into VA leadership. He remembers using a manual typewriter to list out his career goals, aspiring to become a service chief or department head, never quite imagining he’d wind up as deputy under secretary of a 320,000-employee organization.

He advanced in his career in part by taking advantage of VA’s many professional development programs, including an internship, leadership development program and the Health Care Leadership Institute, and later becoming a coach. “Frankly serving as a coach was probably even more meaningful than going through it as a participant,” he said.

He enrolled in the Technical Career Field Internship Program for the health administration service. Although
the training was to last one year, he ascended to the position he trained for within three months, following the departure of two immediate supervisors.

Eventually Young became assistant chief of medical administration service at Iowa City’s VA and then took the same position in Chicago at the Edward Hines, Jr. VA Hospital in Chicago. There he was mentored as part of a leadership development program sponsored by that VA region, receiving opportunities to lead “stretch assignments,” he said, such as the Combined Federal Campaign, the workplace fundraising initiative.

“When I think about the greatest opportunity that comes out of the mentoring relationship, it is having somebody watching for opportunities,” Young said. “Anytime that I have ever talked to anybody about growth and career opportunities I always fall back on this concept, which is to seek those opportunities that are outside your comfort zone.”

He worked full time at Hines during the day and studied at night at DePaul University, where he earned a master’s degree in Public Services Management.

From Hines, he traveled west to become chief of medical administration at the VA San Diego Health Care System, which he led for two years until 1996. While there, he served as a mentor in the same program he benefited from. “It’s sort of that concept of paying it forward,” Young said. “Interestingly, (my mentee) went on to become an associate medical center director.”

Other colleagues praised his honest, straightforward attitude. Ralph Gigliotti, director of Veterans Integrated Service Network 19, has known Young since the early 1990s. “Steve is very Veteran-centric,” Gigliotti said. “He values the dignity of everyone he comes into contact with regardless of their status in the organization.”

Stovall credits Young with her career growth. “I think he saw something in me I hadn’t seen before,” she said. “I never considered being a director until Steve got a hold of me.”

Young said VA constantly pushed him outside his comfort zone, which sometimes means “going places away from home.” Young has crisscrossed the country during his VA career, serving among other roles as interim medical center director in Los Angeles, Phoenix, Chicago, Montana and New York; deputy network director for the VA Sunshine Healthcare Network; and associate director of medical centers in Tampa, Florida, and Lebanon, Pennsylvania.

Young said his career arc also included “the opportunity to meet some genuine American heroes, medal of honor recipients, D-Day Veterans, former prisoners of war — the men and women that are actually the fabric of our 20th century history.”

During his years at VA, he became board certified in health care leadership and a fellow at the American College of Healthcare Executives; graduated from Leadership VA and the VHA Health Care Leadership Institute; and became a certified mentor for VHA, including the senior executive service. He received the VHA Communications Visionary Award in 2014, the Secretary’s Meritorious Service Award in 2015 and Preceptor of the Year in 2016.

Serving as a foot soldier in the care evolution

Along the way, he was a “foot soldier” in VA’s evolution of healthcare delivery, spearheaded in the late 1990s. This work instituted dramatic changes in areas such as eligibility, funding, performance metrics and the electronic health record. It also included making primary care the foundation of VA healthcare.

Young traveled the country to educate Veterans on the broadened eligibility rules. “And from a career perspective,” he said, “what was especially meaningful for me was just being asked to be part of something bigger than myself.”

This led to VA’s next transformation into whole healthcare and Veteran-centered care.

“It’s pretty exciting to see VA leading the nation in that arena,” Young said. “From my vantage point, I see us having an opportunity to really focus on those large issues, those large philosophical and programmatic issues, and getting a little bit away from the day-to-day crisis management that so defined us for the last few years.”

He said he’s wistful he won’t be at VA as it tackles key issues such as becoming a high-reliability organization, decreasing variation across the system, renewing the focus on patient safety and solidifying whole health as the central tenet of Veterans’ care.

Young urged those exploring a career in healthcare at VA to look at the ample research demonstrating the quality of care at VA and to know that the people of VA are dedicated to Veterans.

“The employees who make up VA are just a phenomenal group of human beings,” Young said. “And the opportunity to work with these men and women over the years has really been a wonderful experience.”

Young plans to spend retirement in Florida with his wife, Chris, rejuvenating and relaxing. He has two grown daughters: one is a fellow University of Iowa graduate living and working in New York City, and the other is a junior at the University of North Carolina at Chapel Hill.

“Steve is one of those individuals where everyone is happy for him (in his retirement),” Gigliotti said. “But there’s a real sense of loss to the organization with all that he brought to the table and also in the sense of trying to fill those shoes.”

(read part 1 of this story)