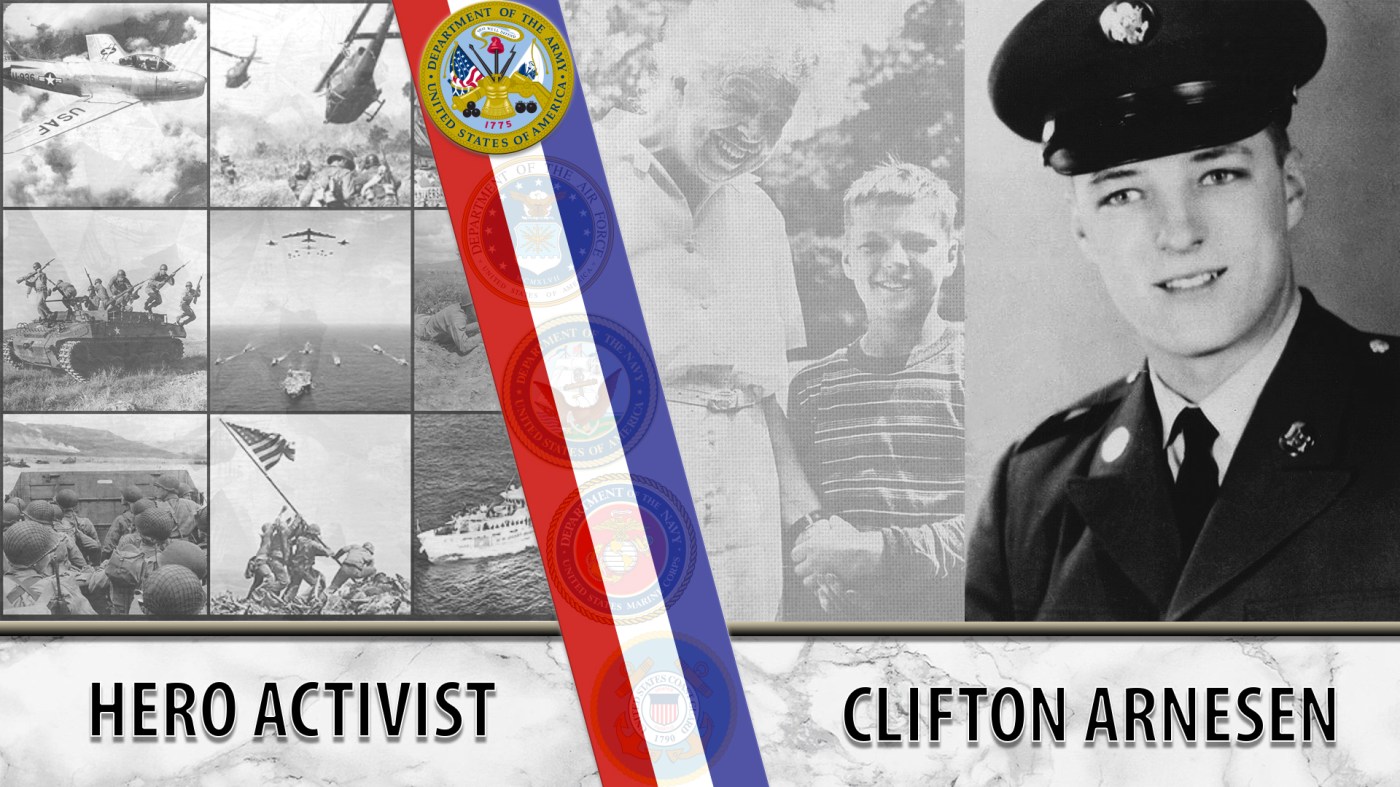 Clifton Arnesen enlisted to escape his troubled childhood but was discharged due to his sexuality. Later he became an advocate for LGBT troops.

Clifton Francis Arnesen Jr. was born in November 1948 in Jersey City, N.J. to a troubled home. His father was an abusive alcoholic, and his mother was disabled with heart complications from rheumatic fever.

When Arnesen was three, his father threw him against a wall. After that, he lived in an orphanage. The orphanage wasn’t much better. The children were paddled for wetting the bed, and the staff removed the faucet handles from the bathroom to prevent the children from drinking water at night. In turn, the children drank from the toilet bowls when they got thirsty.

When he was six years old, Arnesen left the orphanage to live with his mother. To escape his father’s abuse, Arnesen’s mother sent him to the Wiltwyck School for Boys, a school for emotionally troubled children. At the Wiltwyck School, Arnesen found a happiness that, until then, he had never known.

Over the years, Wiltwyck was where Arnesen first discovered that he was bisexual. At his age, he was not fully aware of the term. He developed feelings for one of his friends but kept the feelings to himself in fear of rejection. These attractions became a source of internal conflict, as they clashed with his Catholic upbringing.

When he turned 13, Arnesen left Wiltwyck for the Floyd Patterson House. He lived there for three years before returning home to his mother. But things at home still hadn’t changed. To again escape his father, Arnesen sought to join the Army. He was 16 and pleaded with his mother for a waiver. She was worried about heightened tension in Vietnam, but relented when Arnesen promised to finish high school in the Army.

Joining the Army was supposed to be Arnesen’s path out. He thrived in basic training at Fort Dix. The Army taught Arnesen discipline and self-esteem. But deep down, he was afraid that his secret would come out. He enjoyed the military life but felt like he was living a lie.

Before he had completed training, Arnesen discovered that his mother had entered into another abusive relationship. He felt compelled to go home “to do something,” and went AWOL to resolve the situation. But upon getting home, his mother persuaded him against any action. A few weeks later, he turned himself in to the Military Police.

Upon his return to Fort Dix, the MPs questioned Arnesen. When he told them that he was attracted to men, the investigators accused him of lying to get out of serving in Vietnam.

After getting tried for going AWOL and spending four months in prison, Arnesen was dishonorably discharged for homosexuality. He said that, at the time, the military did not acknowledge bisexuality, and this distinction made no difference to them.

When Arnesen returned to his mother to tell of the reason for his discharge, she told him that she had always suspected it. Rather than getting angry or blaming herself for his sexual orientation, she affirmed her love for him and agreed to keep it a secret. She died of breast cancer five months later. Arnesen never saw his father again, and turned toward the gay community, settling in Boston.

Soon, Arnesen devolved into a spiral of drug and alcohol abuse. In 1977, he petitioned the Army for a discharge upgrade under President Carter’s Amnesty Act. He was granted, and his discharge was upgraded to “General Under Honorable Conditions.”

Trying to get his life straightened out, he began attending AA meetings. He went back to school and became the first person in his family to go to college. In 1987, he graduated from Bunker Hill Community College with an Associates Degree in Human Services and a Certificate in Mental Health. A year later, he began studying psychology through the Harvard Extension School.

Arnesen then became a social advocate for gay and lesbian Veterans. In 1988, he became the President of the New England Gay, Lesbian, and Bisexual Veterans, Inc. He also began working for VA as a Patient Service Assistant. With a growing resume, Arnesen was asked by Senator Nunn to testify during policy hearings for “Don’t Ask, Don’t Tell.” This invitation was revoked when Nunn learned that Arnesen was bisexual, rather than heterosexual. Arnesen presented written testimony but would eventually get his opportunity to testify before Congress in the 1990s as a leading advocate for LGBT reform.

You can learn more about Arnesen’s Story at The Veteran’s History Project: http://memory.loc.gov/diglib/vhp/story/loc.natlib.afc2001001.44399/