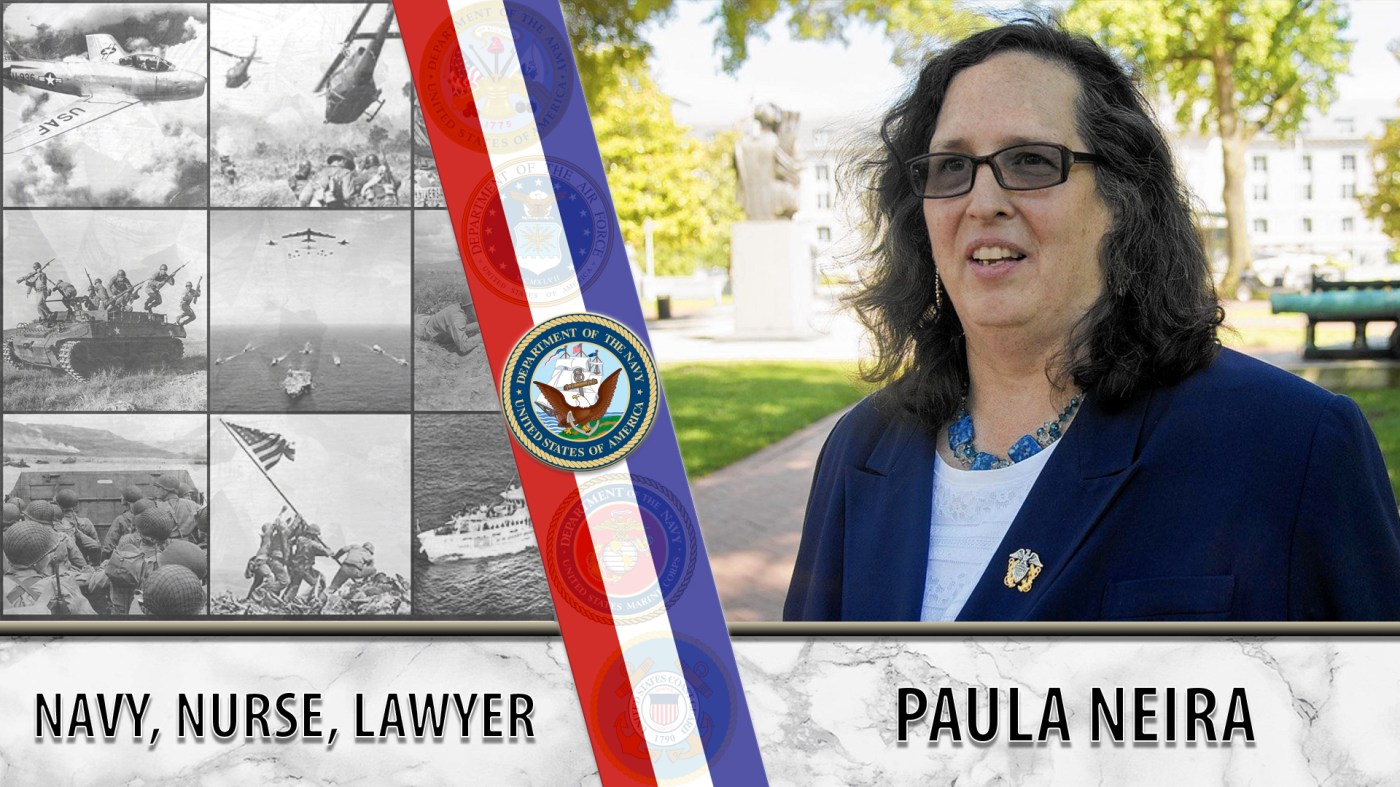 Paula Neira’s greatest service came after she put away her Navy uniform. She later became a nurse, lawyer and transgender advocate.

Paula M. Neira’s childhood dream was to serve in the Navy and be an aviator. She described her dream the like the movie Top Gun: she wanted to be “Maverick” and fly jets off aircraft carriers.

Neira graduated with distinction from the United States Naval Academy in 1985. When eye strain led to her inability to meet the vision requirement to become a pilot, she became a surface warfare officer instead. Neira loved being on destroyers and sea driving ships, but when another opportunity presented for flight physical, she retook it and passed.

When Neira began Navy aviation training, her lifelong struggle to accept her gender identity resurfaced. At the time, the Navy considered Neira to be a male service member. Becoming a male pilot would mean that she would have to remain in that role for the next 20 years. The last thing she wanted was to leave the Navy, her childhood dream unfulfilled.

By 1987, Neira—with her mine warfare operations experience—took part in Operation Earnest Will, the Navy’s then-largest maritime convoy operation since World War II. That led to her recall in May 1991 to serve in mine countermeasure combat operations in Desert Storm.

For Neira, this was her way of living up to her end of the deal. “I’m a Naval Academy grad, I’ve got all this training and here was a real-world threat,” Neira said. She always felt that her place was with the fleet. “I’ve been trained to do the job, I was good at the job, and this is what I’m supposed to do.”

After returning home, Neira resigned from her reserve commission. Two months later, the Navy told her that she was selected for the TAR (Training and Administration of the Reserve) program. Neira was heartbroken and needed time to think. “It was not that I hadn’t finally accepted that I’m female; it was that I didn’t want to leave the Navy.” In the end, she declined the Navy’s offer.

Afterward, Neira became a registered nurse and also an attorney. As a member of the Maryland bar since 2001, Neira became a leader in the effort to bury the “don’t ask, don’t tell” policy and change the military’s transgender regulations. From 2008 to 2016, she served as the nurse educator in emergency medicine at Johns Hopkins. In November 2016, she became the Clinical Program Director of the John Hopkins Center for Transgender Health.

In 2015, she made history by becoming the first transgender Navy Veteran to have her DD-214 updated to reflect her correct name. Neira considers her work as a lawyer, an advocate and a nurse as “actions that flow from the oath of office.” In the past, she would say that she sacrificed her calling after leaving the Navy. Now, she says that she sacrificed only her previous career.

“I’ve come to realize that my calling was broader than just me actively serving as a Navy officer,” she said. “The calling has been to serve the country. I have been given this really unique opportunity to serve in a completely different way.”

She believes her greatest service to the country and Navy has come after putting away her uniform.

For her service, Neira received the Navy Commendation Medal with two gold stars, a Navy Achievement Medal, and a  Combat Action Ribbon.