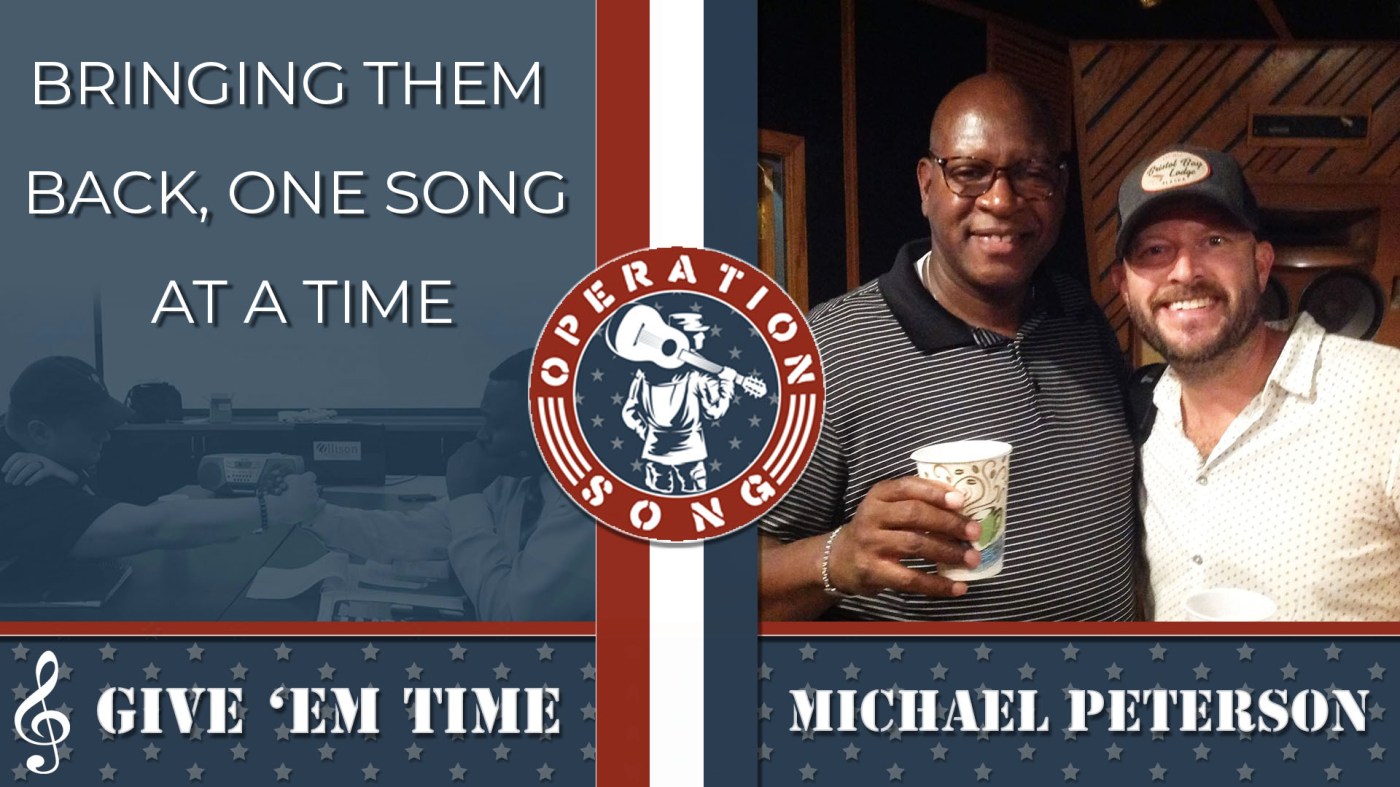 Michael Peterson served in the Army for 20+ years and fought in Operations Desert Shield and Desert Storm. He wrote a song with help from Operation Song.

This #OperationSong spotlights “Give ‘Em Time” by Veteran Mike Peterson, who collaborated with songwriter Jason Sever. Peterson served 20+ years in the Army, and served in Operations Desert Storm and Shield with the 1st Armored Division.

Peterson grew up in Columbus, Georgia, in a military family. Upon high school graduation, he enlisted into the Army to see and travel the world, pursue an education, and “make something out of himself.” When he graduated in 1982, his graduation ceremony was on a Friday and he was sworn in the same weekend. He reported to basic training at Fort Dix, New Jersey, the following week.

Throughout his 20-year career, Peterson deployed around the world, performing a wide range of occupational skills, starting from a mechanical background that later led to leadership roles. He considers the six months he spent in the Persian Gulf as one of the most significant moments in his career.

During Operations Shield and Storm, Peterson served in a Forward Operation Logistics unit, in close proximity to the war’s frontline. He recalled driving through the “highway of death” while on the offensive toward Saddam Hussein’s forces. The things he saw then would impact him for the rest of his life. He channeled those experiences in “Give ‘Em Time,” a song he co-wrote with Jason Sever, which highlights the process of healing.

After retiring from the Army in 2003, Peterson became a contractor, employed over the years by various government agencies, never really stopping to take a moment to look after himself.

It wasn’t until 2017 that Peterson was diagnosed with post-traumatic stress disorder (PTSD) and received the proper medical care that he needed. It was then that he became involved with the music therapy program at the Richmond McGuire VA Medical Center.

Peterson shared how the music therapy program helped relieve his chronic pain, depression and anxiety. He was selected to attend the Operation Song songwriting workshop in Nashville, Tennessee, where Veterans were given a chance to share and express their experiences through song. Peterson felt that Operation Song was “life-changing,” and the first time he could “express himself freely” without judgment.

In his song, Peterson’s lyrics reflect his journey, with the theme that healing doesn’t happen overnight: “You gotta give ‘em time/sit ‘em down and try tomorrow/sometimes you gotta force a smile/when all you feel is sorrow.”

The song delivers on Nashville’s Southern charm and Peterson’s Georgia roots, with a bright keyboard and twangy electric guitar in an uplifting tempo that matches the spirit of perseverance integral to his healing process. As the song winds down, the chorus repeats before Peterson’s favorite line: “You gotta let ‘em rest/and sit up on the shelf/’cause sometimes answers show up like a real fine wine.”

In comparing life’s struggles and problems to aging a wine, Peterson’s song gives everyone who may be struggling with heartache a chance to reflect and relieve themselves of the mental and emotional burdens they may carry, and asks listeners to give it up to the process of healing and trust that tomorrow will be better.