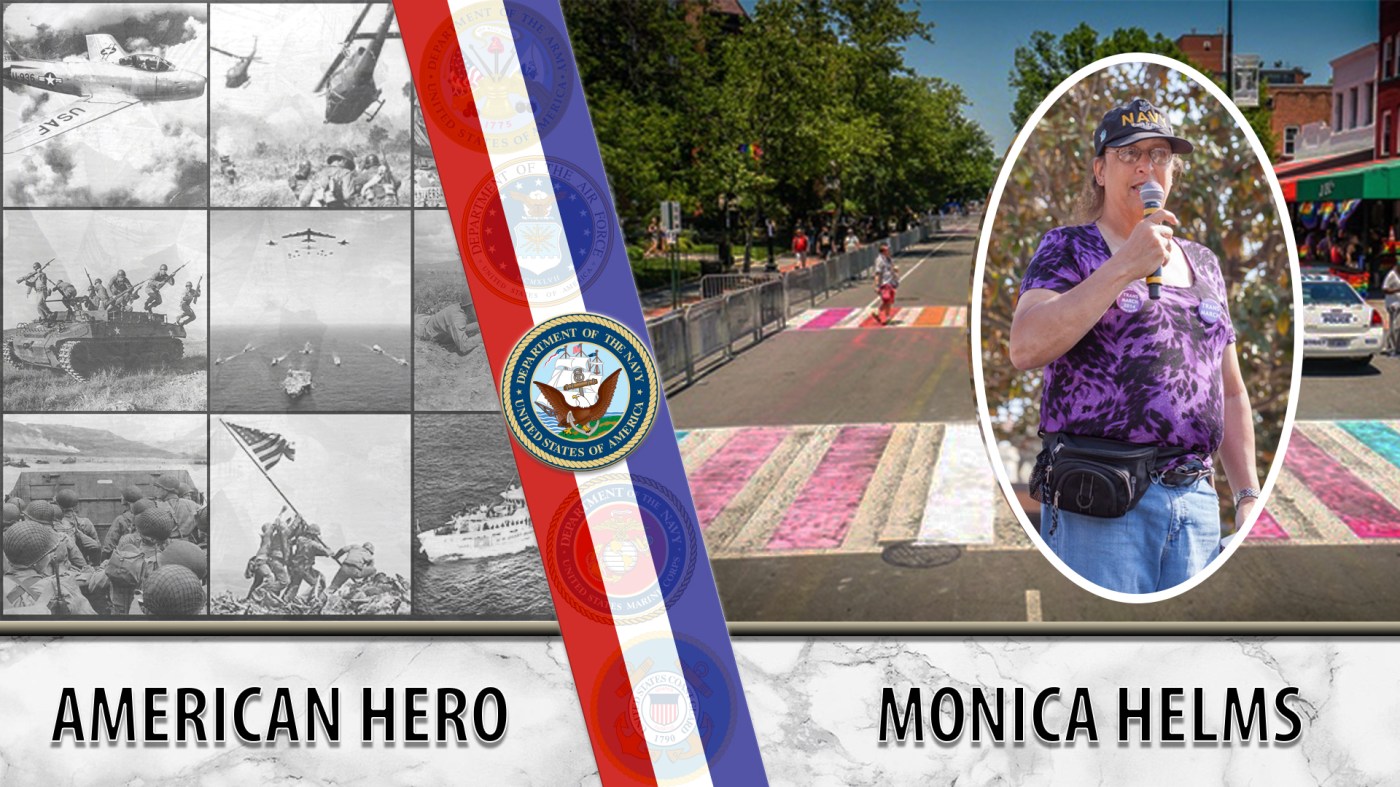 Navy Veteran and activist Monica Helms is the creator of the Transgender Flag.

Monica Helms was born in Sumter, South Carolina, but grew up mostly in Arizona. She graduated from high school in 1969 and started her service in the Navy in 1970, continuing her family’s legacy of military service.

In the Navy, Helms was a nuclear-trained machinist mate and worked on submarines. Helms was assigned to USS Francis Scott Key submarine from 1972–1976 and USS Flasher from 1976–1978. Helms’ time in the Navy helped her grow as a person and strengthened her independence, which has served her well during her life as an activist. In 1987, Helms received a general associate’s degree as well as an associate’s in industrial television from Glendale Community College in Arizona.

Helms began her gender transition in 1997. The very next year, she reapplied to her local Phoenix, Arizona, chapter of the United States Submarines Veterans Inc. Helms had previously applied and been a member in 1996 but faced conflict after changing her name. Helms persevered and was one of the first women to join the organization.

In 1999, Helms created the transgender flag after she was encouraged by Michael Page, the creator of the bisexual flag, to design a flag to represent her community. The transgender flag has a palindromic design with five stripes. There are two light blue stripes to represent the traditional color for boys, two pink stripes to represent the traditional color for girls, and a white stripe in the middle for members who are transitioning, gender neutral or intersex.

Helms debuted her flag in 2000 at a Pride parade in Phoenix, Arizona. Over time, the flag was picked up by the transgender community and is now seen around the world, even as an emoji on iPhones and androids. Helms donated the original flag she made, and it can be seen at the Smithsonian.

In 2000, Helms moved to Atlanta, Georgia, so she could be closer to Washington, D.C., where she often worked to advocate for transgender people and transgender Veterans. Helms’ activism led to the founding of the Transgender American Veterans Association in 2003, an organization Helms was president of until 2013. In 2004, Helms was elected as a delegate in the Democratic National Convention, becoming the first transgender delegate from Georgia. Helms is dedicated to her activism, and her proudest moments are when she is able to see her persistent advocacy creating a change.

Helms currently lives in Atlanta and has been involved in Atlanta’s Transgender Day of Remembrance annual event and planning for many years. While in Georgia, she also attended Chattahoochee Technical College, graduating with an associate’s degree in television production technology in 2018. In 2019, 50 years after the Stonewall Riots, Queerty named Helms one of the Pride50, a group of “trailblazing individuals who actively ensure society remains moving toward equality, acceptance, and dignity for all queer people.” She also published her memoir, “More Than Just a Flag,” that same year.