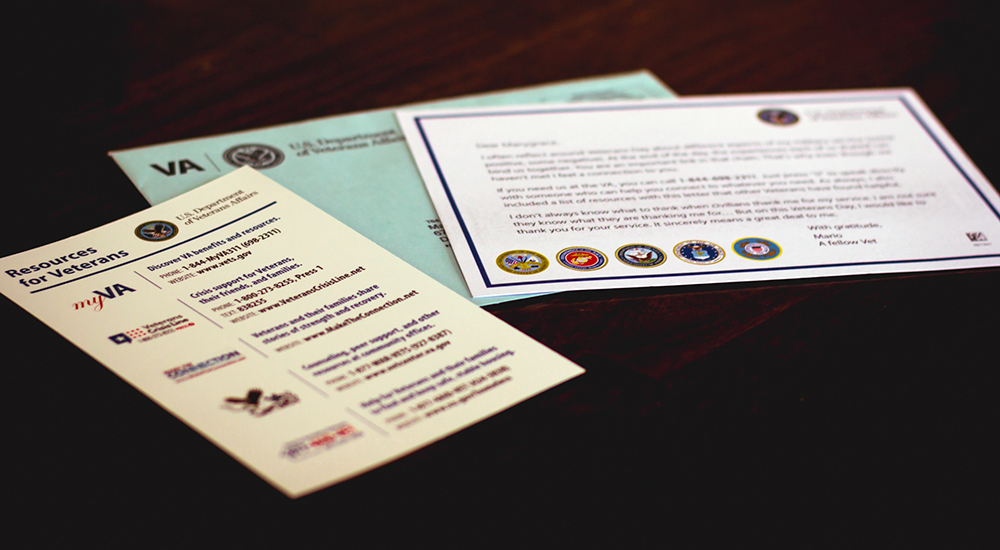 In a tough year when many people are experiencing isolation, hardship or loss, a simple letter can provide a beacon of hope.

This humble approach may seem like a drop in the bucket for a problem as challenging as suicide, but studies have shown that these types of letters can make a difference.

VA’s Caring Letters Program is a suicide prevention intervention that involves sending periodic messages with simple expressions of care and concern to Veterans who use VA health care and contact the Veterans Crisis Line (VCL).

It’s still too early to tell what the ultimate impact will be for the Caring Letters Program. Still, VCL has received positive feedback from Veterans and providers.

One Veteran recipient who is enrolled in the program said, “It felt good and comforting to know that my fellow brothers were there for me.”

Another recipient said, “I felt encouraged. I felt refreshed that my life does have meaning and that there are people charged with making sure my needs are met.”

Reaching Veterans in every state

The scale of the project is impressive.

Caring Letters are reaching Veterans across the country in every state and beyond. They are mailed once a month for the first four months after a Veteran calls the VCL and every other month after that, with an extra card for Veteran’s Day.

Reaching out to Veterans quickly and following up over the year is important. Data shows the rate of suicide for VCL callers is higher than the general Veteran population. That’s especially true in the first few months after they call.

We want each Veteran to know they are not alone

Before this effort started, Veterans provided input on the style of the cards, which include the seals of the military service branches. The brief messages are mailed in greeting card-style blue envelopes. They share supportive comments that show an interest in the wellbeing of the Veteran. And they remind them that help is available if they ever need it.

Although the letters have gone to thousands of Veterans, the people behind them and signing off are real and so is the intent.

“We care about every Veteran who calls the Veterans Crisis Line,” Kearney said. “We want each Veteran out there to know they are not alone. There are people they can call for information, resources, or support.”

An evaluation is underway to examine the effectiveness of the program. Suicide prevention is the top clinical priority for VA. VCL is dedicated to continuing to expand critical crisis intervention work to help reduce Veteran suicide.

If you or someone you know is having thoughts of suicide, contact the Veterans Crisis Line. Receive free, confidential support and crisis intervention available 24 hours a day, 7 days a week, 365 days a year.