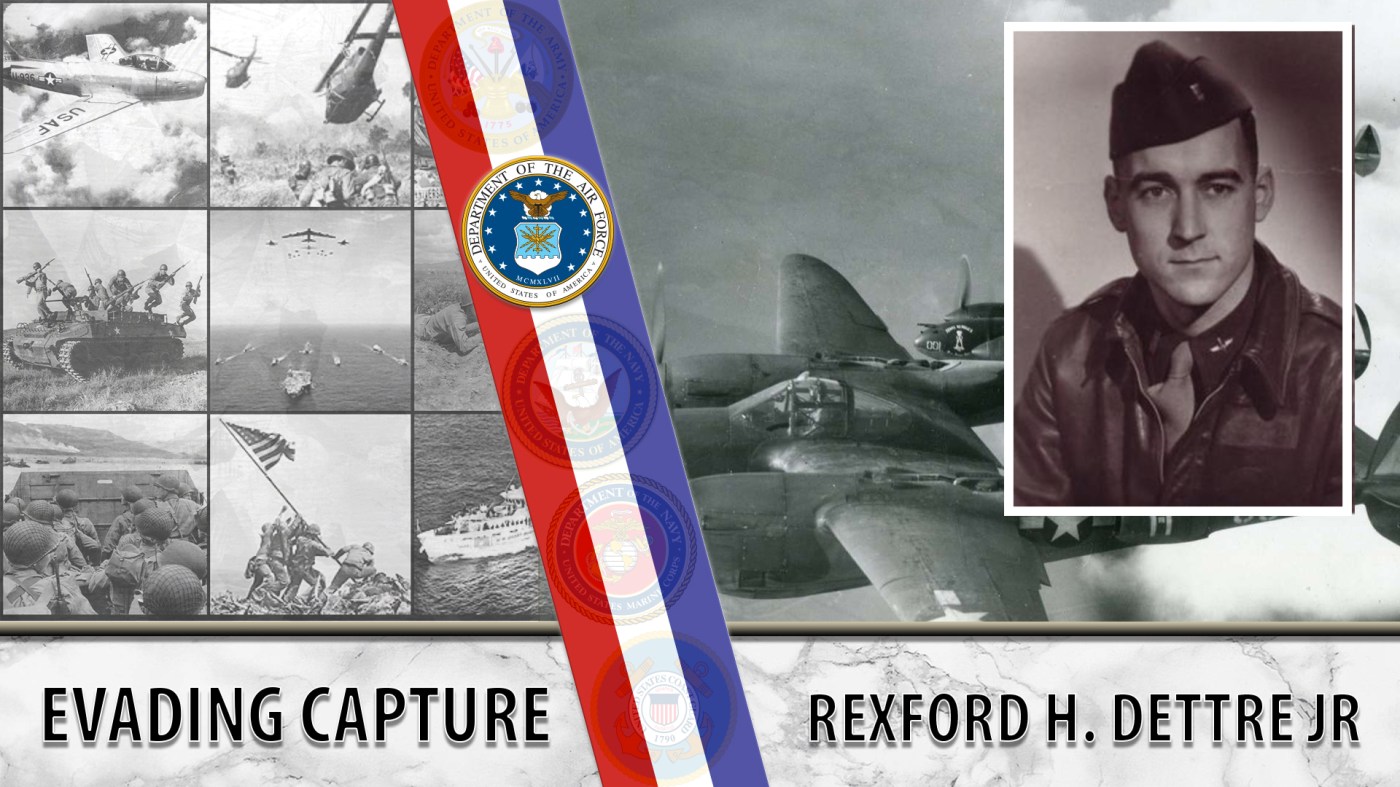 Rexford H. Dettre Jr. served in the Army Air Forces during World War II and became a prisoner of war (POW) after being captured by the Germans.

Rexford H. Dettre Jr. always had an admirable sense of duty for his country and his enlistment in the California National Guard proved that he was fit and motivated for military service. In 1938, his outstanding performance academically earned him an appointment to the U.S. Military Academy at West Point.

Dettre’s class graduated through an accelerated process after the U.S. entered World War II. After graduating from West Point, commissioning as a second lieutenant, and earning his aviator wings in November 1942, he joined the 331st Fighter Squadron. He was soon sent to England with the 20th Fighter Group in March 1944, flying his first mission in April, where he expended munitions at a German air base and helped down a German bomber.

On one of his later escort missions over Germany, Dettre’s aircraft engine malfunctioned and started shaking, causing him to lose control. He was forced to abandon his aircraft while descending over enemy occupied territory. He exited the cockpit and parachuted out. Upon landing in hostile territory, he avoided capture for more than three months. During this time, he met a fellow pilot, Dick Scott. Their evasion tactics worked until they reached a safehouse in Brussels, where the owner had arranged a car to take them to the Swiss border. Instead, they were driven straight into the Gestapo headquarters. The pair were initially imprisoned at Stalag Luft III and attempted to escape multiple times. Dettre was transferred to many different prisoner camps before being liberated from Stalag XIIIB in April 1945.

After returning to the U.S., Dettre served with the 1st Fighter Wing at March Air Force Base, California, and undertook graduate studies in mechanical engineering at the University of California, Riverside. In April 1949, he was assigned to Headquarters U.S. Air Force as a staff officer in the office of the deputy chief of staff for operations. When the Korean War started in October 1950, Dettre joined the 35th Fighter Group in Korea. As a group operations officer, he completed 110 combat missions.

Dettre would serve multiple roles over the course of his military career. He worked as an instructor and then assistant professor of mathematics at the U.S. Military Academy for three years. Following this, he was assigned to the 31st Air Division at Snelling Air Force Station, Minnesota, as director of operations and training. After serving with the 65th Air Division in Spain, he was stationed at Air Force headquarters as a member of the Directorate of War Plans. He later was assigned to the Directorate of Plans and Policy as part of the Joint Chiefs of Staff.

Dettre became commander of three different divisions from 1964 to 1967. He led the 408th Fighter Group at Kingsley Field, Oregon; the 4780th Air Defense Wing at Perrin Air Force Base, Texas; and the 30th Air Division at Sioux City Air Base, Iowa. During the Vietnam War, he became assistant chief of staff for plans as part of the U.S. Military Assistance Command in the Republic of Vietnam in February 1970. He also flew 89 missions in Vietnam.

Dettre retired as a major general in 1973. Among his numerous awards, he received a Distinguished Service Medal, a Legion of Merit, a Distinguished Flying Cross and three Air Medals.

“Maj. Gen. Dettre was a true American hero who served his country with distinction,” said retired Maj. Gen. Jeff Hammond in a 2017 article from the University of Southern Mississippi. “His motto was, ‘If there is a job to be done, it should be well done.’ He honored that motto throughout his military career and his civilian life. Our country is fortunate to have men and women like Maj. Gen. Dettre who gave so much of themselves for our freedoms.”

Dettre died in March 2004. He was 83. His wife, Betty, later started the Maj. Gen. Rexford H. Dettre, Jr. Duty-Honor-Country Annual Scholarship at the University of Southern Mississippi to support military students there.