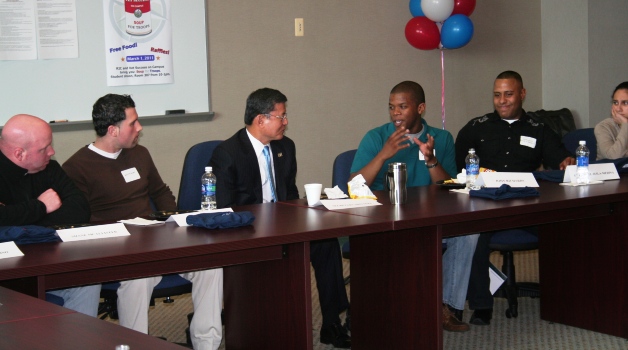 Veterans are mission-oriented. It’s only natural after a stint in the military, where, whether it’s a patrol in a combat zone or a training exercise stateside, the next operation is planned to the smallest detail.  But once a tour of duty is over, it’s up to the Vet, on their own, to continue to plan and execute the next mission in the civilian world.  This is the part where some Vets fall through the cracks; when the next thing to accomplish isn’t so clear.

In his visit to the Rhode Island Community College last week, VA Secretary Eric Shinseki set a new mission for Vets attending school:  graduation.  Through their service, Vets have earned education benefits, but it’s up to them to finish and get a degree, he explained.

On the way back to Washington, I talked to the Secretary and asked him to elaborate on some of the things he’d discussed with students earlier in the day.  Sitting in a busy terminal at the Providence airport, he explained past implementation difficulties with the Post-9/11 GI Bill, what is being done to automate the process, and what it means to reintegrate back into society after a tour in the military.

The original GI Bill of 1944 transformed the country and further established the middle class. Likewise, the Post-9/11 GI Bill can certainly duplicate an era where disciplined Veterans can help dig the country out of its economic rut and out-educate and out-innovate the entire world, as President Obama recently discussed in his State of the Union address. In order for them to succeed, VA surely has a role to ensure Veterans can keep their minds on homework and tests instead of their next housing payment. To that end, I asked the Secretary about the implementation problems of fall 2009 and what is being done today to make sure it doesn’t happen again.

Secretary Shinseki could’ve placed blame on Congress for setting a quick implementation date, but he instead spoke with regret about the lack of foresight within the organization.

“I don’t think we understood the complexity of the new legislation,” he said, referring to the new rules that guided housing stipends and tuition rates. After all, the old GI Bill was a one-size-fits-all rule and relatively easy to administer. With little time to develop a robust automation system, VA had to move ahead with a manual process. As a result, untold thousands of students weren’t paid on time (including me), and VA faced backlash in the media and many Veteran organizations.

Key education folks told the Secretary the complexity of the process was the problem.

“Whose process is it?” he asked.

“Then we can uncomplicate it,” the Secretary replied.

Luckily, the idea of simplifying the process took hold. Like any system, it’s still not perfect, but it has improved greatly since the fall of 2009. Back then, two thousand claims could be processed in one day. Now, ten thousand claims are going out the door daily. Students who recall difficult delays in that first payment will remember an average processing time of 59 days. In the fall of 2010, it was down to 29. Zero would be the goal, but these numbers do show how automation helped to speed up the process and improve accuracy and service.

Secretary Shinseki has a lot on his plate to finish before his tenure is up. Reduce Veteran homelessness, further improve the GI Bill process, continued transparency, and keeping VA health care standards high are all on the agenda. He’s a big-picture guy—and he let me know it. While each issue contains unique challenges, they can all be solved in part by doing one thing: transforming the agency. And that means a shift in culture where employees are concerned. To have a “sense of responsibility and greatness for what we do,” the Secretary explained. “We need people who come to work that have a set of behaviors that are different from what they were a few years ago,” he added. The Secretary expressed a desire for future leaders that are chosen on their ability to implement positive change—to assist in transforming the department.

“The hardest thing to do in an organization is change,” he said. “If Veterans are going to fare better, it’s because the organization has transformed.”

The Secretary envisions three key components for student Vets to complete their mission of graduation. The first centers on Student Veterans of America, which has a unique ability to organize Veterans into groups with a strong focus on graduation. The second is Vet Success, a VA pilot program at eight college campuses designed to help student Vets deal with the red tape of government programs to get the assistance they need, as well as provide tools (like job placement and résumé building) to help after graduation. The last, and one that would take the most work, is a sustained effort by Veteran Service Organizations to help civilians recognize and acknowledge Veterans in the community to demystify what it means to be a Vet. “We’ve got to knock down this myth that Veterans are walking around with serious problems, the Secretary said. “As long as it persists I can’t get them jobs.”

You can’t discuss the education of Veterans without mentioning reintegration. In the mission to return to normal life, a degree often becomes the first operation for many Vets. As a twice wounded Vietnam Veteran, Secretary Shinseki has an idea of what it means to come home from war a changed person. As our talk concluded, I asked if he had any parting wisdom for Veterans who face life-long challenges:

“I look back, and it’s 40 years now. I think you go through stages, and initially you remember only the worst. But over time you get to see there are some positives. Transition is about moving from negative to positive. But it goes on. It’s a long journey.”