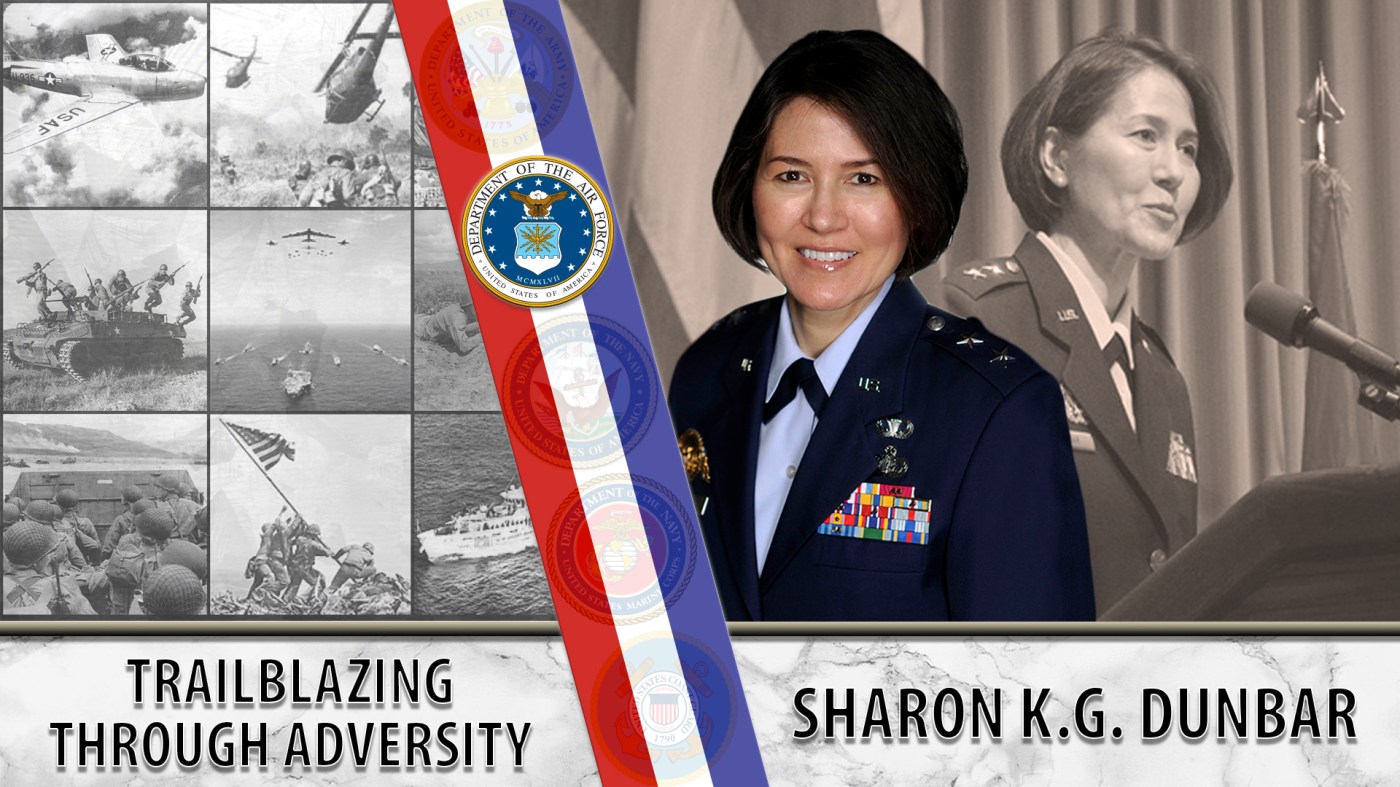 Veteran Sharon Dunbar served for 32 years, becoming one of the highest ranking female Asian Americans in the Air Force.

Sharon K.G. Dunbar hadn’t envisioned a future in the military until she dropped her brother off at the United States Military Academy at West Point and saw other women cadets there. Her parents encouraged her to apply to an academy and, a year later, she started her education at the Air Force Academy, preparing for what would become a 32-year journey of service.

Dunbar’s mother immigrated from Korea in 1947 and soon met the man who would become Dunbar’s father. Together, they raised Dunbar and her older brother in central Illinois. When she was growing up, her family didn’t have a lot of money, so her parents encouraged her to take advantage of the opportunity to get a service academy education and commission.

Dunbar’s parents were very proud to see their daughter serve their country when she started at the Air Force Academy in 1978. In 1982, she graduated with a bachelor’s degree in engineering and business administration and was part of the Academy’s third graduating class to include women.

After graduating, Dunbar got married and began to work in the contracting field, receiving a variety of different assignments. She earned a Master of Business Administration from California State University in 1984 and, in 1991, she was named Contracting Officer of the Year due to her work during the Gulf War. Dunbar was later assigned to be a congressional fellow of the U.S. Senate in Washington, D.C., working with Senator Dan Coats in 1996 as part of the legislative fellowship program with the Brookings Institute. She then became the military assistant to the Under Secretary of the Air Force and later the Under Secretary of Defense. In 2000, she earned a master’s degree in national security studies from the National War College in Washington, D.C.

Over the course of the next six years, Dunbar commanded the 97th mission support squadron, the 737th training group and the 75th air base wing. In 2007, Dunbar earned a Ph.D. in public policy at George Washington University. While pursuing her Ph.D., she served as the director of manpower, personnel and services for two years at Scott Air Force Base in Illinois. In 2008, she transitioned to Washington, D.C., to work at the Pentagon, going from director of manpower, organization and resources to director of force management policy.

In 2012, Dunbar became the first woman to serve as the commanding general of the Air Force District of Washington and the 320th Air Expeditionary Wing. She was responsible for overseeing operations, national security events and ceremonial events in the area, including the 57th presidential inauguration. While she was commander, she was the Uniform Code of Military Justice authority for 40,000 airmen.

As a member of one of the first few Air Force Academy graduating classes with women, Dunbar faced many skeptics along the way who only increased her determination to succeed. In an interview with the Air Force, she said, “Most change in life meets some resistance, but change is ultimately how our society and world progress. We couldn’t field or sustain our all-volunteer military today without female service members.”

Dunbar’s service and contributions have done more than sustain the volunteer military. As a commander, she had many “opportunities to have an influence and shape people’s lives.” She also worked to make beneficial change for future generations by serving on the Defense Task Force on Sexual Harassment and Sexual Violence at the Military Service Academies and the Defense Task Force on Sexual Assault in the Military Services.

Dunbar retired from service in 2014 as a major general. She was one of the highest ranking female Asian Americans in the Air Force. Throughout her service, Dunbar balanced work with her family life and the responsibility of raising two children with her husband. Dunbar now works at General Dynamics and is the vice president of cross-company business. She also served on the board of directors for the Girl Scouts Nation’s Capital for six years and currently serves on the board of directors for the Armed Services YMCA.